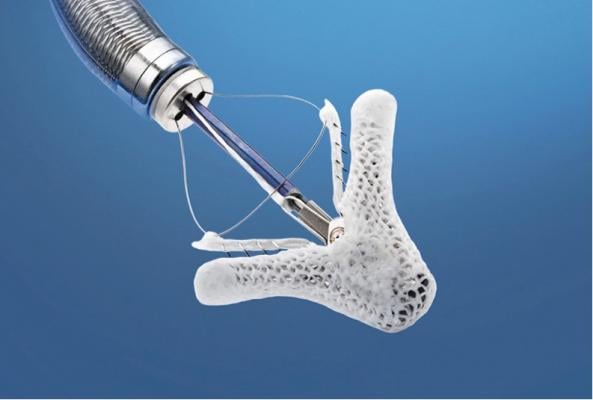 March 20, 2015 —The commercial track record with transcatheter mitral valve repair, approved for patients at high risk for surgery, compares favorably with pre-approval reports, according to findings from a U.S. registry presented at the American College of Cardiology (ACC) 2015 Scientific Session.

"The results of this MitraClip study are very favorable and consistent with the results we saw in studies prior to the therapy's U.S. approval," said Paul Sorajja, M.D., director of the Center for Valve and Structural Heart Disease, Minneapolis Heart Institute and the study’s principal investigator. "The results show clinically meaningful reduction in the severity of mitral regurgitation and improvement in the overall health of very sick people with prohibitive risk degenerative mitral regurgitation (DMR) who have no other meaningful options to improve their lives."
Key findings from the 564 patients treated with the MitraClip device demonstrated the following good outcomes. Prior to treatment, more than 90 percent of patients had a mitral regurgitation (MR) grade of 3 or 4, indicating significant leakage of the mitral valve. After treatment with MitraClip, 93 percent of patients achieved an MR grade of less than or equal to 2, with 63.6 percent at a grade of less than or equal to 1, demonstrating a significant decrease in leakage. The average length of stay in the hospital was three days, with 82 percent discharged home. Adverse events and procedural complications were low, consistent with clinical trial experience.
In 2013, the FDA approved the transcatheter MitraClip system for valve repair in patients with degenerative mitral regurgitation who face prohibitive risk from open-heart surgery. It remains the only commercially approved alternative to surgical repair of mitral regurgitation, the most common heart valve problem, and is available in Europe and at about 100 U.S. centers. FDA approval came with a requirement for all patients treated with this system to be enrolled in the American College of Cardiology/Society of Thoracic Surgeons Transcatheter Valve Therapy Registry; coverage by the Centers for Medicare and Medicaid Services carries the same stipulation.
This is the first study of outcomes with transcatheter mitral valve repair outside of a clinical trial since the system was approved. Analyses are based on data from the ACC/STS registry, gathered from 61 hospitals for 564 patients who underwent the procedure between November 2013 and August 2014.
“Our results show that the transcatheter MitraClip system is a safe and effective valve repair treatment for patients with symptomatic mitral regurgitation whose surgical risk is prohibitive,” Sorajja said. “Similar to other transcatheter therapies, TMVR with MitraClip has an operator learning curve, which directs interest to outcomes now that the procedure is being performed outside the context of a clinical trial.”
The study’s main outcome was success of the procedure, defined as a reduction in mitral regurgitation to a level of moderate or less without later heart surgery or in-hospital death. By this measure, valve repair was successful for 518 patients, or 91.8 percent, and also reduced mitral regurgitation to mild or less in 63.7 percent. Researchers found that institutional experience with the procedure and case volume had a bearing on procedural success but not on major adverse outcomes, complications or device-related events.
In-hospital mortality was 2.3 percent, and four of the 13 patient deaths were from heart-related causes. Other outcomes of interest were clinically significant events within 30 days of the procedure. The rate for stroke or transient ischemic attack, a brief stroke-like event often called a mini-stroke, was 1.2 percent, and there was no heart attacks. Procedural complications arose in 7.8 percent of patients, and devicerelated events appeared in 2.7 percent. At 30 days of follow-up, 5.8 percent, or 26 patients, had died, 15 of them from heart events; the stroke rate was 1.6 percent; and 8 percent had re-entered the hospital for heart failure. “Overall, procedure success rates were high, procedural complication and device-related event rates were low, and hospital stays were quite short at an average of three days,” Sorajja said. “In addition, 82 percent of the patients were discharged directly to home from the hospital with another 10 percent discharged directly to extended care. These results are remarkable, especially when one considers that these patients are elderly with significant morbidities.”
When patients are eligible for either TMVR or surgery, surgery reduces mitral regurgitation more effectively. Sorajja emphasized that TMVR is approved for patients at prohibitive risk from open-heart surgery — patients whose risk of serious injury or death from surgery outweighs the potential benefits. The study’s findings are not applicable to lower-risk patients, although smaller studies have shown similar survival rates for TMVR and surgery in lower-risk patients with different degrees of decrease in mitral regurgitation.
Limitations of this study include dependence on site-reporting of outcomes and its focus only on the in-hospital and early outcomes.
“More long-term follow-up is needed to address the clinical significance of residual mitral regurgitation in these and other TMVR-treated patients, but these data give considerable insight into the commercial use of this procedure in the United States,” Sorajja said. “The Transcatheter Valve Registry will allow us to continue to collect and analyze data to improve our understanding of the impact of this treatment option.”
Healthy valves function as one-way gates that keep blood moving forward through the heart. Severely damaged mitral valves do not close properly, allowing blood to leak backward. If the valve isn’t repaired or replaced, the condition can cause serious health issues or death. An estimated 600,000 people in the United States have a severely leaking mitral valve, called primary or degenerative mitral regurgitation, and some are medically unfit for repair surgery.
Abbott Laboratories manufactures the device but did not sponsor this research. Sorajja has commercial ties to the company.
For more information: acc.org, www.mitraclip.com