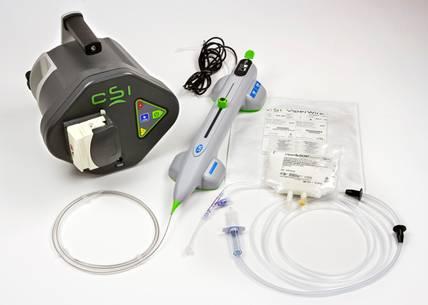 June 9, 2014 — After one year, patients treated with orbital atherectomy, a procedure to sand away calcium in the coronary arteries prior to stenting, were less likely to require a repeat procedure to reopen their vessel or suffer a heart attack or death compared to other published trials in patients with heavily calcified arteries. The new results from the ORBIT II study were presented as a late-breaking clinical trial at the Society for Cardiovascular Angiography and Interventions (SCAI) 2014 scientific sessions in Las Vegas.

The ORBIT II study is the first to exclusively investigate severely calcified lesions, and it studied high-risk patients that are usually excluded from large clinical trials, including those on dialysis or with low left ventricular ejection fraction (>25 percent). In patients treated with percutaneous coronary intervention (PCI), calcified lesions are associated with greater frequency of stent under expansion, which may result in the need for repeat coronary intervention and coronary artery bypass graft surgery (CABG).

“Often patients with calcified lesions are more difficult to treat because the calcium can interfere with proper stent placement,” said Jeffrey Chambers, M.D., FSCAI, director of the cardiac catheterization laboratory, Mercy Hospital, Minneapolis, and the study’s principal investigator. “If the stent cannot be placed properly the patient may need additional procedures and even surgery.”

In the trial, investigators treated patients using the Diamondback 360 orbital atherectomy system (OAS). The catheter-based device’s crown rotates in the artery to sand the calcified portion of the plaque into minuscule particles. The device received U.S. Food and Drug Administration (FDA) approval in October 2013.

“In addition to patient clinical outcomes, pre-treatment of these difficult-to-treat, severely calcified lesions with coronary OAS resulted in cost savings due to more efficient procedures and lower readmission rates,” said Chambers. “In an era where we are treating more patients while aiming to achieve better outcomes at greater value, these findings are significant. Not only does this procedure improve care, but it can do so more efficiently.”