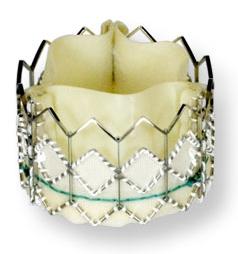 Transcatheter valve therapies were among the hottest topics at the 2010 Transcatheter Cardiovascular Therapeutics (TCT) symposium and the key presentation was the very positive first release of data from the U.S. PARTNER trial. The trial results are widely expected to open the door to a major transition away from surgical to transcatheter aortic valve repair in the coming years.

The trial compared patients with severe aortic stenosis who were not suitable candidates for surgery, who were randomized between transcatheter aortic valve implantation (TAVI) using the Sapien THV valve, as compared with the standard therapy of balloon aortic valvuloplasty. The PARTNER trial showed a significantly reduced rate (54 percent) of death from all causes and rehospitalization using TAVI.

Presenting the data was Martin Leon, M.D., associate director of the Center for Interventional Vascular Therapy, New York-Presbyterian Hospital/Columbia University Medical Center and chairman of the Cardiovascular Research Foundation. He explained the results of PARTNER’s cohort B, which included 358 patients who were considered high-risk surgical patients and turned down for surgical valve repair. Of these patients, 179 were treated with TAVI. Leon said the data show TAVI was superior to standard therapy, markedly reducing death after one year. It significantly reduced the rates of death from cardiovascular causes and repeat hospitalization.

“Not only did the patients live longer, they felt better,” Leon said.

At 30 days, there was a major statistical difference in the six-minute walking test results between TAVI and standard care patients. At one year, Leon said 75 percent of patients with New York Heart Association Class III and IV heart failure were reduced to class I and II levels. Ninety percent of TAVI patients also had no or only minor aortic valve regurgitation.

“We believe that TAVI should be the new standard of care for patients who have aortic valve stenosis and are not suitable candidates for surgery,” Leon said.

He said a major reduction in deaths and disease was accomplished with a new procedure being performed by inexperienced operators, which he thought was astounding.

“We also learned standard therapy, in almost 84 percent of patients, did not alter the abysmal natural history of aortic stenosis,” Leon explained.

Despite the excellent results, Leon said TAVI patients did have much higher rates of major vascular events (16.2 percent vs. 1.2 percent) and major bleeding (16.8 percent vs. 3.8 percent) and stroke due to the implant procedures.

He hopes the stroke rate can be lowered, possibly with the use of embolic protection devices.

“It is an overwhelming trial for us,” said Jeffrey Popma, M.D., Beth Israel Deaconess Medical Center, Boston. “What I am most struck by in this trial is how poorly the standard-of-care patients did.”

He cited the 50 percent mortality rate for patients in the standard care arm of cohort B. He and many other physicians question whether it will be ethical in the future to randomize patients to standard therapy with such poor outcomes.

The study data was published in The New England Journal of Medicine on the eve of the TCT presentation.

“Without exciting, new minimally invasive treatment options like TAVI, people with severe aortic stenosis will continue to have few to no treatment options and will die from their disease,” said Christopher White, M.D., FSCAI, chairman, department of cardiology, and director of the Ochsner Heart and Vascular Institute, Ochsner Medical Center in New Orleans, and president-elect of the Society for Cardiovascular Angiography and Interventions (SCAI). “These results are very encouraging and suggest TAVI is an effective treatment option for severe aortic stenosis in patients who cannot have surgery.”

He said the first angioplasty in 1977 provided a new, minimally invasive way to treat heart attacks that today has resulted in millions of lives saved. He said TAVI may be in the same class and may provide a new frontier in treating these patients.