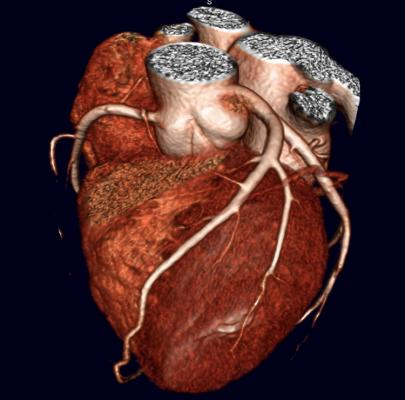 November 1, 2013 — According to a new study, administering the blood thinner bivalirudin to patients experiencing an ST-elevation myocardial infarction (STEMI) in a pre-hospital setting can reduce the risk of death and major bleeding complications compared to heparin with optional use of glycoprotein IIb/IIIa inhibitors. Findings from the EUROMAX trial were reported at the 25th annual Transcatheter Cardiovascular Therapeutics scientific symposium (TCT 2013).
The EUROMAX trial evaluated the administration of anticoagulant therapy prior to hospital admission by an emergency medical team. The trial compared a heparin-based strategy (with or without glycoprotein IIb/IIIa receptor inhibitors (GPIs) to a bivalirudin-based strategy. The primary endpoint was a composite incidence of death or non-coronary-artery-bypass-graft related protocol major bleeding at 30 days, assessed by intention to treat.
While bivalirudin has been compared to other blood thinners in hospital settings, the EUROMAX study is the first to evaluate these anticoagulant therapy options prior to hospital admission and in conjunction with newer P2Y12 inhibitors such as prasugrel and ticagrelor. The randomized, international, prospective, open-label ambulance trial enrolled 2,198 patients with STEMI and intended for primary percutaneous coronary intervention (PCI), presenting either via ambulance or to centers where PCI is not performed.
Patients either received bivalirudin (n = 1,089) or heparin (n = 1,109) at guideline-recommended doses (with or without routine or bailout GPI).
After 30 days, patients that received bivalirudin, as compared with the heparin group, experienced a significantly lower rate of death and major bleeding (5.1 percent versus 8.4 percent, respectively). The secondary composite outcome of death, reinfarction and major bleeding at 30 days was also reduced with bivalirudin (6.7 percent in the bivalirudin group compared to 9.1 percent in the heparin group). Despite a lower rate of bleeding complications in the bivalirudin-treated patients, the risk of acute stent thrombosis was higher in the bivalirudin group compared to the heparin group (1.1 percent versus 0.2 percent, respectively), findings that parallel those observed in the HORIZONS-AMI trial.
“The benefits of bivalirudin stemmed from a substantial reduction in major bleeding and were robust and consistent across subgroups, regardless of the adjunctive oral antiplatelet therapy or the arterial access route used for angioplasty,” said Philippe Gabriel Steg, M.D., director, coronary care unit, Hopital Bichat at Assistance Publique - Hôpitaux de Paris.
“Findings from EUROMAX provide important additional insights into the role of bivalirudin in the pre-hospital setting prior to primary PCI.”
For more information: www.crf.org, www.nejm.org