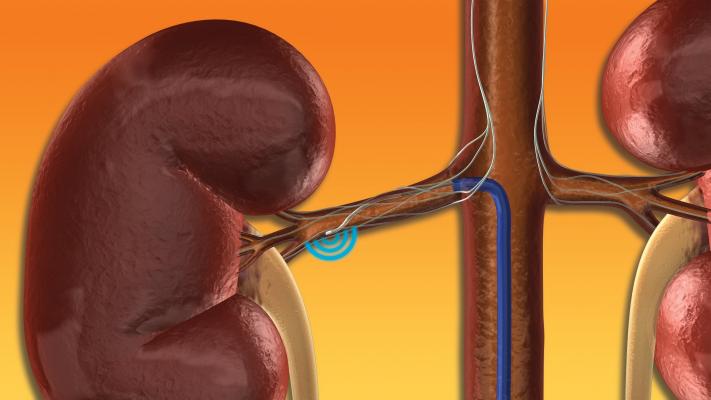 An illustration of how renal denervation therapy is delivered, in this case using a Medtronic Symplicity device.

October 14, 2013 — Since its debut in 2010, the renal denervation market has generated enthusiasm across the medical device industry with predictions that the market would reach more than $1 billion by 2020.  However, the impact of major barriers, which will slow down this growth, was essentially underestimated according to an analyst with research and consulting firm GlobalData.

According to Joseph Gregory, GlobalData's analyst covering surgical devices, one of the most pressing barriers is reimbursement. Renal denervation has been approved in Europe since 2010 but has only seen full reimbursement in Germany and Austria as of 2013.

“The various European-run health insurance agencies are not entirely convinced of the long-term safety and efficacy of the procedure due to the lack of available data from sophisticated clinical trials. Currently, procedures in these countries are either being funded out of pocket or by a portion of hospital budgets dedicated toward the use of novel technologies,” said Gregory.

The establishment of a new referral pattern is another significant hurdle for the renal denervation market. Patients typically see their primary care physician first, and once uncontrolled hypertension is diagnosed, their physicians refer them to a hypertension specialist or cardiologist who will then make a final referral for the procedure.

“Medical device companies which specialize in interventional cardiology products have strong, established relationships with cardiologists, but their network does not extensively breach this first line of referral from primary care physicians. Thus, the sales and marketing teams of renal denervation companies have the difficult job of developing this network from scratch,” said Gregory.

The current state of the clinical trial data will also constrain the market, according to Gregory. While company-sponsored studies have to date proven short-term safety and efficacy, there is still ambiguity with regards to device performance in the long term, as well as the degree of efficacy that can be achieved.

“Further, looking at long-term procedure outcomes for renal denervation, there is very limited data available, as the longest follow-up to date is just three years, from Medtronic’s open-label, non-randomized Symplicity HTN-1 study,” said Gregory. “Overall, taking into consideration the full impact of these and numerous other market barriers, it is doubtful that renal denervation will prove to be the next blockbuster in the medical device industry.”