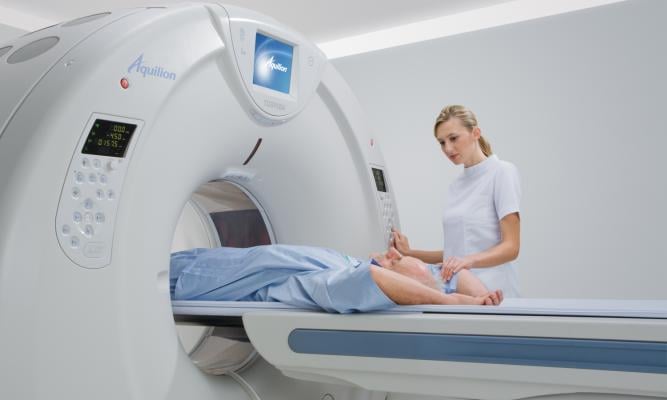 April 24, 2012 — The secondary cancer risk from multi-detector computed tomography (MDCT) scans is low among older adults, according to a study from Stanford University in the April issue of the Journal of the American College of Radiology. A high-speed imaging technique, MDCT is commonly used to diagnose a variety of diseases and conditions.

Evidence shows that MDCT scanning offers important benefits through more accurate diagnosis and better disease management in a range of medical disorders. However, in the era of MDCT, it has been hypothesized that 1.5 percent to two percent of all cancers may be caused by CT-induced radiation.

“Our study estimates the number of excess cancers due to ionizing radiation in elderly adults. Seniors harbor most diseases that typically rely on CT scanning for diagnosis and management, and therefore receive the highest exposure to CT imaging. What our study found is that the risk of developing a secondary cancer from these CT scans may potentially be lower than previously thought,” said Aabed Meer, author of the study.

A retrospective cohort study was conducted using Medicare claims spanning eight years to assess CT use. The data were analyzed in two four-year cohorts, from 1998 to 2001 and 2002 to 2005. The number and types of CT scans each patient received over the four-year periods were analyzed to determine the percentage of patients exposed to threshold radiation of 50 to 100 mSv (defined as low) and >100 mSv (defined as high). The National Research Council’s Biological Effects of Ionizing Radiation VII models were used to estimate the number of radiation-induced cancers.

CT scans of the head were the most common examinations in both Medicare cohorts, but abdominal imaging delivered the greatest proportion (43 percent in the first cohort and 40 percent in the second cohort) of radiation.

“Although modern CT imaging is a vital part of medical care, its utilization must include a conscious acknowledgment of radiation exposure and an awareness of the pursuant carcinogenic risk. As medical care continues its dependence on advanced technologies such as MDCT, we emphasize the importance of continuing research that encourages the exploration of lower radiation dose technologies,” said Meer.