A retrospective review of bleeding complications from a community-based hospital 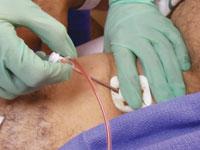 The implementation of dedicated access site surveillance and educational programs, in tandem with pre-existent strategies to reduce access site complications, can reduce the overall incidence of femoral access-related bleeding events.

Percutaneous coronary interventional (PCI) procedures are performed throughout hundreds of U.S. institutions every day. With the increasing frequency of these procedures being performed comes an associated rise in certain companion risks, namely access site complications.  There have been calls for more access site surveillance and staff education, which can help reduce adverse events.

Post-procedural access site complications can include, but are not limited to, infection, bleeding, hematoma, neural damage, vessel perforation, arterio-venous fistula and pseudo-aneurysm formation.[1] These untoward consequences of catheter-based procedures may impart a significant degree ofmorbidity and, less frequently, mortality. It seems reasonable that early intervention to identify and address these potential complications would be the best defense to attempt to reduce the morbidity associated with them.

Our institutions, Northside Hospital and The Heart and Vascular Institute of Florida, St. Petersburg, Fla., initiated a program that was dedicated to staff education regarding access site complications, as well as post-procedural surveillance of catheter access sites. This study retrospectively examines the effect this program had on incidence reduction with respect to major bleeding events, as defined by the American College of Cardiology (ACC) guidelines, in those patients undergoing PCI during a three-year period.

The nurse would record, for each patient, the following information:  date and time of initial procedure, date and time of followup, access site location, whether or not a closure device was employed, presence of bleeding and/or hematoma and, if so, a description of their findings, presence or absence of distal pulses, and the presence or absence of bruit at access site. Any significant findings would then be immediately relayed to either the attending cardiologist or the cardiology fellow assigned to the interventional service for urgent attention. Significant findings may include, but not be limited to, marked ecchymosis, any bleeding, hematoma or changes in perfusion as manifested by alteration in distal pulse quality.

Furthermore, the educational component of this initiative targeted both the ancillary and professional healthcare providers caring for these patients both in the immediate post-operative period as well as during the period leading up to their hospital discharge. Every nurse who had the potential to be assigned a post-catheterization patient, typically those on the cardiac step-down and critical care units, received in-service training regarding management of post cardiac catheterization access sites, including recognition of signs and symptoms of untoward events. Special attention was paid to identification and management of hematoma, particularly retroperitoneal hematoma.

Specific instructions [1] as to routine access site followup and care were individually addressed and posted in a conspicuous location for reference. The nurse caring for the patient was again responsible for relaying any concerns regarding the access site to either the attending cardiologist or the cardiology fellow assigned to the interventional service throughout the remainder of the patient’s inpatient stay.

A review of data from the National Cardiovascular Data Registry (NCDR) with respect to access site complications (bleeding, hematoma formation, pseudo-aneurysm) from a period beginning Jan. 1, 2008 and ending Dec. 31, 2010 was performed. All data was obtained through a retrospective review of targeted events within the central database. All patients undergoing percutaneously directed coronary interventional procedures during this time period were included in the analysis.

We examined the total number of significant bleeding events (access site bleeding, hematomas and retroperitoneal bleeding) manifesting within the first 72 hours following the procedure within the quarterly time periods described above. A major bleeding event, per ACC guidelines, was defined as any of the following: Hematocrit drop ? 10 percent and/or hemoglobin drop ? 3 g/dL, any transfusion of packed red blood cells (PRBC), intervention at the access site to reverse or correct a bleeding event, including ultrasound-guided compression and invasive surgical repair.

We looked for a reduction in major bleeding events between years 2008, 2009 and 2010, with particular attention being paid to differences observed between the four quarters of 2008, prior to the initiation of the targeted education and surveillance program, and the eight quarterly periods between January of 2009 and December of 2010, which marked the initiation of the education and surveillance program. In addition, in an attempt to eliminate confounding data secondary to radial and brachial access, we subtracted out the radial and brachial access cases from each year to compare the differences seen with femoral artery cannulations across the three study years. Finally, to further reduce bias, we looked at the incidence of femoral closure device use across cases in each of the three years.

For 2010, data from 586 patients undergoing PCI was reviewed and subsequently compared to outcomes from the NCDR. A femoral (474 patients, 81%) arterial access approach was utilized. Four patients experienced a major bleeding event (0.6% of total procedures) within 72 hours of PCI. There were no major bleeding events associated with the use of the radial or brachial techniques, therefore these cases were subtracted from the data pool.

So, while no significant difference with respect to reduction in bleeding events was noted in a comparison of the data from 2008 with 2009 and from 2009 with 2010, the data over the three-year study period from 2008 to 2010 did demonstrate significance with respect to the trend in bleeding event reduction. The data show implementation of dedicated access site surveillance and educational programs, in tandem with pre-existent strategies to reduce access site complications, can reduce the overall incidence of untoward femoral access-related bleeding events.

Access site complications constitute the most common adverse events to occur following PCI.  They are associated with both increased length of stay and the associated healthcare costs. ACC and NCDR have previously reported an overall serious event rate related to vascular access of 1.56 percent.[2] Retroperitoneal hemorrhage, though infrequent, remains a potentially devastating complication of percutaneous vascular access. Early recognition of the signs and symptoms with appropriate and rapid action to control bleeding should attenuate the morbidity associated with retroperitoneal bleeding.[2, 6]

It appears, however, that the benefit of this educational and surveillance program, with respect to reduction in total bleeding events related to femoral artery access, occurred independent of the use of a femoral closure device. We, therefore, propose that the implementation of a dedicated access site surveillance and educational program, in tandem with pre-existent strategies to reduce access site complications, can reduce the overall incidence of untoward femoral access-related bleeding events.

Christopher H. Wilson, D.O., is from the department of medical education at Northside Hospital, St. Petersburg, Fla. Kerri Wing, R.N., BSN, is from the department of nursing at Northside Hospital. Peter C. Wassmer, M.D., FACC, and Robert Sanchez, M.D., FACC, are from The Heart and Vascular Institute of Florida, St. Petersburg, Fla.

6. Farouque et al. “Risk factors for the development of retroperitoneal hematoma after percutaneous coronary intervention in the era of glycoprotein IIb/IIIa inhibitors and vascular closure devices.” J. Am. Coll. Cardiol. 2005; 45, 363-368.