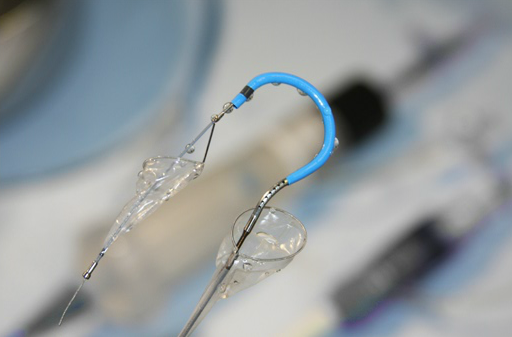 September 22, 2014 — A first-of-its kind study found that using a cerebral protection device during transcatheter aortic valve replacement (TAVR) can significantly reduce the number and volume of cerebral lesions in high-risk patients with severe aortic stenosis. Stroke risks are higher with TAVR than surgical valve replacement, so embolic protection of the carotid arteries would greatly help to reduce this risk and make TAVR a safer procedure. Findings were reported Sept. 13 at the 26th annual Transcatheter Cardiovascular Therapeutics (TCT) scientific symposium in Washington, D.C.

The trial used a device made by Claret Medical, which deploys two embolic protection nets in the ostium of both carotid arteries. The system is inserted via radial access and combines a guidewire, guide sheath and the double embolic protection devices into a single device.

Stroke remains a major predictor of mortality after TAVR. Cerebral protection devices are designed to reduce the risk of stroke by capturing and removing embolic debris that can be released during the procedure. CLEAN-TAVI was a prospective, randomized, double-blind single-center study, and the first trial to examine the impact of a cerebral protection device in preventing magnetic resonance imaging (MRI) -detected brain lesions during TAVR. The primary endpoint was the number of lesions in the protected brain region as determined by diffusion-weighted MRI (DW-MRI) subtraction at two days post TAVR. Secondary endpoints included the total lesion volume at two and seven days after TAVR and lesion number at seven days.

A total of 100 patients with severe aortic stenosis who were at increased surgical risk were recruited and randomly assigned in a 1:1 ratio to TAVR with cerebral protection (device group) or TAVR alone (control group). Patients underwent MRIs of the brain before and at two and seven days after TAVR. After two days, the median number of lesions in the protected regions in the device group was significantly lower than the control group (4 versus 10, respectively, p=0.009). At seven days after TAVR, the median lesion number was also significantly lower in the device group compared to the control group (3 versus 7, p=0.0023). In addition, the median total lesion volume in the protected area was significantly smaller in the device group compared to the control group at two days (246 mm3 versus 527 mm3, respectively, p=0.0023) and at seven days (101 mm3 versus 292 mm3, p=0.002).

“In patients with severe aortic stenosis who are at increased surgical risk, the use of a cerebral protection device during TAVR significantly reduced the number of cerebral lesions in the protected brain regions,” said lead investigator Axel Linke, M.D., a professor at the University of Leipzig Heart Center in Germany. “Device use also reduced the volume of cerebral lesions as determined by DW-MRI.”