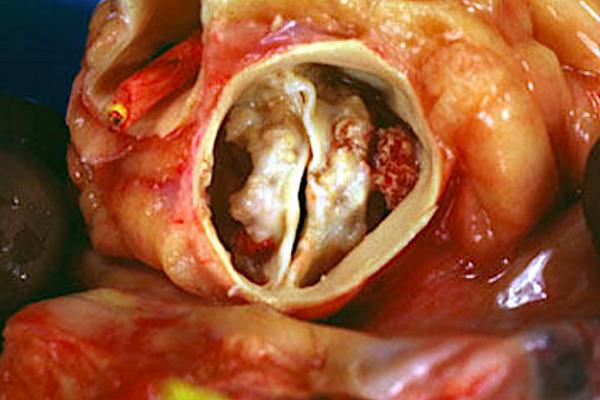 March 29, 2020 — Patients with bicuspid, or two-leaflet, aortic valves who undergo transcatheter aortic valve replacement (TAVR) procedures had a high rate of success and low risk of death or disabling stroke at 30 days, according to new data presented at the American College of Cardiology (ACC) 2020 Scientific Session. The session was part of the virtual, online late-breaking presentations, since the live meeting was cancelled due to the spread of COVID-19.

TAVR has become increasingly popular in recent years as a less-invasive alternative to open-heart valve replacement surgery. However, few studies have examined its safety in patients with a bicuspid valve, a genetic variation of the aortic valve in some patients, rather than the typic three-leaflet valve. The condition affecting roughly 2-5 percent of people in which two of the three flaps in the aortic valve are fused together.

A bicuspid valve is more likely to become stenosis. Valve replacement, either through TAVR or open-heart surgery, is the main treatment option available for people with severe aortic stenosis, which causes fatigue and other symptoms and raises the risk of other heart problems when left untreated. The new study is the first to prospectively examine TAVR’s safety for treating severe aortic stenosis in relatively young, healthy patients—in whom open-heart surgery would pose a low risk—who have a bicuspid valve. It also is one of the first studies involving such patients in which doctors used a newer self-expanding artificial valve.

“This clearly has clinical implications with patients with bicuspid valves who want TAVR," said Basel Ramlawi, M.D., cardiothoracic surgeon at Valley Health System in Virginia and the study’s co-principal investigator. "TAVR with a self-expanding prosthesis is a very viable and safe procedure in low-risk bicuspid patients and achieved excellent early results. Though additional follow-up is necessary to determine long-term outcomes, early results suggest this procedure can be performed successfully in low-risk individuals with a good outcome.”

The study prospectively tracked 150 patients who underwent TAVR at 25 medical centers in the U.S. On average, patients were 70 years old and had a Society of Thoracic Surgeons (39) risk score (which reflects the risk of dying during or shortly after open heart surgery) of 1.4 percent.

Thirty days after their procedure, just 1.3 percent of patients had died or experienced a disabling stroke, the study’s primary safety endpoint. Patients also had an overall device success rate of 95.3 percent, reflecting a low rate of major complications, ill-fitting valves or the need for additional procedures. The vast majority (99.3 percent) of patients survived the procedure, 96 percent showed correct positioning of the valve and 100 percent had mild or no aortic regurgitation (blood leaking around the valve).

Basel Ramlawi, M.D., cardiothoracic surgeon at Valley Health System in Virginia and the study’s co-principal investigator, explaining the clinical implications of TAVR in patients who have bicuspid aortic valve leaflets during the ACC 2020 virtual meeting.

Bicuspid valves can have several different shapes, which are named according to the Sievers classification system. The study found 84.6 percent of those with a Sievers type 0 valve had trace or no aortic regurgitation and the rest had only mild aortic regurgitation, a high rate of success that Ramlawi said was somewhat unexpected due to the perceived complexity of operating on valves with this shape. 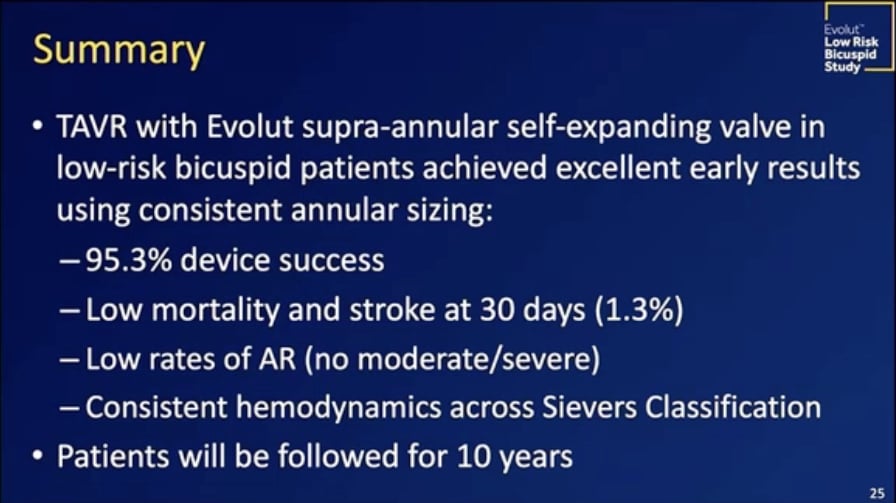 The researchers plan to continue to track outcomes in the patients for 10 years to assess the long-term efficacy of the TAVR-implanted valves. Ramlawi said that the study was limited by the fact that all patients received TAVR, rather than providing a randomized comparison between TAVR and open-heart surgery. In addition, the study was conducted in medical centers that perform a high volume of TAVR procedures, and it is unclear whether a similarly high success rate would be achievable in centers with less TAVR experience.

Surgery vs. TAVR for Bicuspid Patients

However, he said surgery has been the standard of care for bicuspid patients and with the issues these patients have in TAVR procedures, surgery is still a good option for many.

"Surgery does exteremely well in this population," Ramlawi explained. A lot of times it is the patient coming to me and I have talked them out of getting TAVR. But, if they meet the inclusion criteria, TAVR is an option."

A big topic of discussion in the past couple years has been how to include more bicuspid aortic valve patients in TAVR. One possibility it use of the BASILICA procedure developed at the National, Heart, Lung, and Blood Institute (NHLBI), part of NIH. It involves using an electrosurgical cutter to split the bicuspid leaflet to enable better hemodynamic flow to the coronaries once a TAVR valve in placed. This helps prevent obstruction of the coronaries,

Read more about this procedure in the article BASILICA Procedure Prevents Coronary Obstruction From TAVR.

The trial was funded by Medtronic, maker of the self-expanding valves used in the study.