However, study did not meet its primary endpoint of smaller infarct size 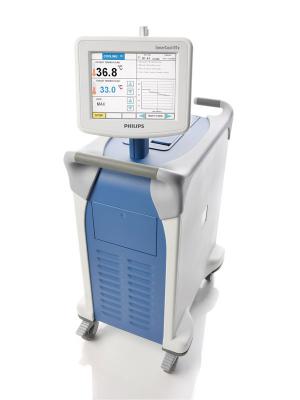 November 1, 2013 — A clinical trial shows that rapidly cooling patients who have suffered ST-elevation myocardial infarction (STEMI) prior to restoring blood flow is safe and feasible. However, the primary endpoint of reducing infarct size was not significantly reduced. The findings of the CHILL-MI trial were presented at the 25th annual Transcatheter Cardiovascular Therapeutics scientific symposium (TCT 2013).
CHILL-MI was a prospective, randomized multicenter efficacy trial that builds on initial findings from the pilot RAPID MI-ICE trial, which showed significantly reduced infarct size when patients were cooled below 35 degrees Celsius before angioplasty. The primary endpoint for CHILL-MI was myocardial infarct size as a percentage of myocardium at risk, assessed by magnetic resonance imaging (MRI) at two to six days after the procedure.
This study enrolled 120 patients in nine centers with large anterior and inferior STEMIs with infarct duration of less than six hours. Patients underwent percutaneous coronary intervention (PCI) and were randomized to the traditional standard of care or hypothermia induced by rapid infusion of up to 2,000 ml cold saline combined with endovascular cooling using the Philips InnerCool system. In the hypothermia group, cooling was initiated before PCI (to achieve the target temperature took about 42 minutes) and continued for one hour after reperfusion with a target temperature of 33 degrees Celsius followed by spontaneous rewarming.
Due to the time required for cooling, door-to-balloon time was impacted by an average of nine minutes in the hypothermia group. The primary endpoint, infarct size in relation to the area at risk was non-significantly reduced by 13 percent (p = 0.15) with similar myocardium at risk between both groups. Although the trial missed its primary endpoint, exploratory analysis indicates an effect in the early anterior patient population with a 33 percent reduction of infarct size.
At 45±15 days, there was no mortality. However, the incidence of clinical heart failure was 14 percent in the control group and 3 percent in the hypothermia group (p < 0.05).
“Hypothermia using intravenous cold saline and an endovascular venous cooling catheter was safe, feasible and reduced temperature to 34.7 degrees Celsius before reperfusion, with a delay of reperfusion of nine minutes,” David Erlinge, M.D., professor, department of cardiology, Lund University, Skane University Hospital, Sweden, and lead investigator of the study. “Although reduction in infarct size in relation to area at risk did not reach significance, we found a significant reduction in the incidence of clinical heart failure. Furthermore, we observed a large reduction in infarct size in the anterior patient population, but this needs to be validated in a prospective study.”
Erlinge said if the trial had been powered with more than 200 patients, he said the trial would likely have met statistical significance and met the primary endpoint.
He said the length of the cooling protocols (stoping at one hour after PCI instead of 24 hours or more used at some other centers) and when cooling was initiated (starting earlier prehospital by EMS adminsitring cool saline and ice packs) might also be variables to  consider in future trials.
"This is the last frontier in interventional medicine — to prevent reperfusion injury," said Bernard Gersh, MB, CH.B., D.PHIL, Mayo Clinic, Rochester, Minn. He said hypothermia in animal studies have been shown to reduce infarct size, so it is frustrating that the same results have not translated into human studies.
Devices to induce hypothermia are approved in the United States with indications for neuroprotection in cases of stroke and sudden cardiac arrest.
For more information: www.crf.org