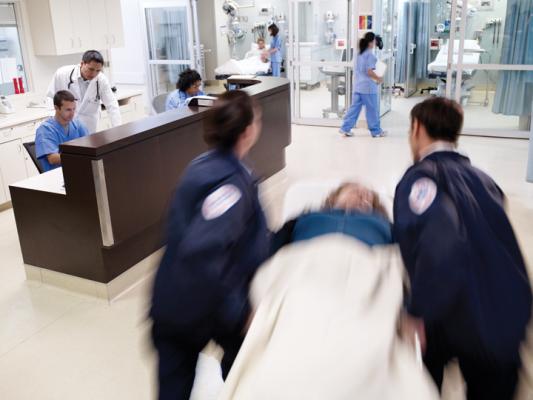 This method also may help reduce the "no-reflow"phenomena following percutaneous coronary intervention (PCI). This is believed to be caused by stenting sending clot emboli downstream into the capillaries. Using ultrasound as a therapy device also has advantages of imaging the anatomy simultaneously.
Nearly 250,000 people experience STEMI heart attacks annually and one of the most important factors for recovery is quick treatment to reduce blockages and restore blood flow to prevent muscle death. While this sonothrombolysis technique has previously been studied in animals, this is the first study to test the method in humans.
"This is a breakthrough, first-in-humans study in patients with acute myocardial infarction that has the potential to revolutionize the treatment of these patients and other acute thrombotic diseases such as stroke and deep venous thrombosis," said senior author Wilson Mathias, Jr., M.D., University of Sí£o Paulo Medical School in Sí£o Paulo, Brazil.
The research team used a standard diagnostic ultrasound transducer to apply high mechanical index impulses during a continuous infusion of Definity (produced by Lantheus) microbubble contrast agent in a large emergency room setting. The combination of ultrasound and echo contrast were used both immediately prior to and immediately following emergent PCI.  Those patients who were randomized to one of two sonothrombolysis groups showed both higher recanalization rates at initial angiography and improving cardiac function. Most importantly, no patient deaths were experienced and door-to-dilation times were not affected, demonstrating both safety and feasibility for this technique.
Ultrasound contrast is composed of microscopic lipid spheres that are injected into the patient's bloodstream.  The bubbles return the ultrasonic sound waves used to form an image and enhance the blood.  The ultrasonic waves also shatter the bubbles and it is the physics of the cavitaion caused by breaking bubbles that enables the microscopic breakdown of the thrombus.
Researchers on the study, "Safety and Feasibility of Diagnostic Ultrasound High Mechanical Index Impulses in Restoring Epicardial Flow in Acute ST Segment Elevation Myocardial Infarction in Humans," included Bruno Garcia Tavares, Jeane M. Tsutsui, Miguel Osmar Aguiar, Diego Garcia, Mucio T. Oliveira, Alexandre Soeiro, Jose C. Nicolau, Pedro Lemos, Roberto Kalil, and Wilson Mathias, Jr. of Heart Institute (InCor) - University of Sí£o Paulo Medical School in Sí£o Paulo, Brazil; and  Thomas R. Porter of the University of Nebraska Medical Center in Omaha.
In future technology sessions at ASE, there were discussions on developing new echo contrast agents with embedded lytic therapy in the lipid shell to deliver lyics only to the targeted anatomy.
For more information: www.asescientificsessions.org