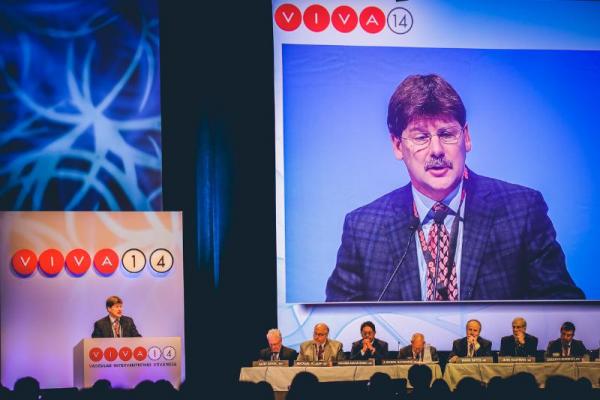 Nov. 11, 2014 — Viva Physicians, a not-for-profit organization in the field of vascular medicine and intervention, announce clinical trial results and other new happenings at Viva 2014, hosted in Las Vegas, Nev.

Below are summaries and results of the clinical trials:

CANOPY is a prospective, multicenter, nonrandomized, single-arm, post-approval study to evaluate the safety and effectiveness of the RX Acculink carotid stent system (Abbott) in patients at standard risk for adverse events from carotid endarterectomy (CEA). CANOPY was mandated by the U.S. Food and Drug Administration as a follow-up study to the CREST trial. Data from the CANOPY trial provide further support of carotid artery stenting as an alternative option to CEA for stroke prevention in standard risk patients.

There were 1,203 patients, symptomatic and asymptomatic, enrolled in the CANOPY trial. Patients with features known to be high risk for CEA were excluded. Patient follow-up occurred at 30 days, 1, 2, and 3 years post-procedure. The primary endpoint is a composite of periprocedural (within 30 days of the procedure) death and stroke (DS), plus ipsilateral stroke between day 31 and 1 year. National Institutes of Health Stroke Scale (NIHSS) assessment was performed before the procedure, post-procedure, at 30 days, and at 1 year. Mean patient age was 69.5 ± 8.5 years, and 40.9% of the study patients were women. Patients 80 years of age or older comprised 9.8% of the trial population. There were 27.9% symptomatic patients, 35.9% diabetics, 91.4% hypertensive patients, and 92.6% patients with dyslipidemia. The primary endpoint rate was 4.4% ± 0.61 with an upper confidence interval of 5.4%, below the performance goal of 8.4%. The DS rate at 30 days was 3.4% in the overall population, 5.8% in the symptomatic patients, and 2.5% in asymptomatic patients; primarily driven by minor strokes. Presence of neurological symptoms before the procedure was a risk factor for the occurrence of DS, but age older than 80 years was not. There was no significant difference in primary endpoint rate between octogenarians and nonoctogenarians.

DEFINITIVE AR is a prospective, multicenter pilot study. It was designed to assess the effect of treating a lesion with directional atherectomy (Covidien's SilverHawk or TurboHawk plaque excision systems) followed by a paclitaxel-coated balloon (Bayer HealthCare's peripheral paclitaxel-coated angioplasty catheter with Paccocath technology), collectively referred to as DAART (directional atherectomy + antirestenotic therapy), in order to generate early hypotheses for further research in this therapy area. This rigorously performed pilot study suggests an added benefit for DAART over DCB in long and calcified lesions.

Claudicants (Rutherford clinical category 2–4) with 7- to 15-cm superficial femoral and/or popliteal lesions were randomized 1:1 to either DAART (n = 48) or to the paclitaxel-coated balloon alone (DCB) (n = 54). Subjects with severely calcified lesions were assigned to a nonrandomized registry arm and were treated with DAART (n = 19). Baseline patient and lesion characteristics did not differ between the DAART and DCB arms. Technical success, defined as ? 30% residual stenosis following the protocol-defined treatment at the target lesion, was significantly higher in the DAART arm vs the DCB arm (89.6% vs 64.2%, P = .004). There were significantly fewer flow-limiting dissections reported in subjects treated with DAART versus DCB alone (2% vs 19%, P = .01). Technical success in the DAART registry group was 84.2% and incidence of flow-limiting dissections was 0%. At 12 months, percent stenosis in the randomized groups was 33.6 ± 17.7 for the DAART arm versus 36.4 ± 17.6 for the DCB arm. Duplex ultrasound patency (PSVR ? 2.4, without target lesion revascularization) was 93.4% for the DAART arm and 89.6% for the DCB arm. Angiographic patency (? 50% stenosis and without target lesion revascularization) was 82.4% in the DAART arm and 71.8% in the DCB arm. Further investigation in larger, prospective, statistically powered randomized trials is warranted. Patients will be followed out to 24 months to assess durability of the results.

Diabetic patients with PAD present with worse arterial disease and poor outcomes compared to non-diabetics. This subgroup analysis of the IN.PACT SFA randomized trial supports the safety and efficacy of DCB versus PTA in diabetic patients with symptomatic femoropopliteal PAD.

The IN.PACT SFA randomized trial demonstrated a significantly higher primary patency (89.8% vs 66.8%; P < .001) and lower target lesion revascularization (TLR) rate (2.4% vs 20.6%; P < .001) at one year for drug-coated balloon (DCB) versus standard percutaneous transluminal angioplasty (PTA) for the treatment of patients with femoropopliteal arterial disease. A predefined subgroup analysis was conducted to explore the effect of IN.PACT DCB versus PTA in patients with diabetes. Diabetic patients presenting from the DCB (n = 89, 40.5%) and PTA (n = 54, 48.6%) arms of the IN.PACT SFA trial were analyzed. Clinical and anatomical baseline characteristics were similar between the two groups. Mean lesion length and percent of total occlusions for the DCB and PTA arms were 9.87 ± 5.21 cm and 9.34 ± 5.19 cm (P = .554), and 20% and 14.5% (P = .506), respectively. Primary patency was assessed as primary efficacy outcome, defined as freedom from restenosis and clinically driven TLR within 12 months. Primary safety was assessed as freedom from 30-day device- and procedure-related death and target limb major amputation and clinically driven target vessel revascularization within 12 months. At 12 months in diabetic patients, treatment with DCBs resulted in a significantly higher primary patency (82.7% vs 62.3%; P = .0015) and lower clinically driven TLR (3.7% vs 23.1%; P < .001) versus PTA. There were no device- or procedure-related deaths, no major amputations, and a low rate of vessel thrombosis through 12 months in both arms: 2.4% (DCB) versus 5.8% (PTA); P = .161.

In the recent CREST trial, transfemoral carotid artery stenting (CAS) showed an excess periprocedural stroke rate (4.1%) when compared to carotid endarterectomy (CEA) (2.3%), while CEA was shown to carry risks of surgical complications including cranial nerve injury (CNI) (4.8%). ROADSTER is a prospective, multicenter, investigational device exemption study designed to evaluate the safety and effectiveness of a novel hybrid carotid revascularization procedure using the Enroute transcarotid neuroprotection system (NPS) (Silk Road Medical Inc.). The primary endpoint was a composite of any stroke (S), myocardial infarction (MI), or death (D) through 30 days. Symptomatic and asymptomatic patients who were at high risk for complications from CEA were eligible. Between November 2012 and July 2014, 208 patients (67 lead-in, 141 pivotal) were enrolled at 18 hospitals. FDA-approved carotid stent systems, chosen according to site preference, were delivered through the direct carotid access point under high-rate flow reversal afforded by the ENROUTE NPS. Baseline pivotal population characteristics included 26% symptomatic, 35% female, and 47% age 75 or older; 56% of patients had physiologic risk factors, and 69% had anatomic risks. In the intention to treat (ITT) population, the rates for S/D/MI, S/D, and any stroke were 3.5%, 2.8%, and 1.4%, respectively. In a per protocol (PP) analysis (n = 136), the outcomes were 2.9%, 2.2% and 0.7%, respectively. There were no strokes in patients age 75 or older, nor in symptomatic patients. Transient CNI at 30 days was 0.7% and fully resolved. The upper 95% confidence interval of the hierarchical primary endpoint event rate in ROADSTER (3.5%) was statistically significantly less than the objective performance criterion (11%; P = .0047). Notably, the any stroke rate of 1.4% (0.7%, PP) in a high surgical risk population is the lowest to date for CAS and comparable to the periprocedural standard surgical risk CEA arm of CREST (2.3%). The ENROUTE transcarotid NPS appears to be safe and effective for obtaining direct carotid access and preventing embolic events during CAS.

The trial was a prospective, multicenter, nonrandomized, single-arm, investigational device exemption study that evaluated the safety and effectiveness of the Supera peripheral stent system (Abbott) for treatment of superficial femoral (SFA) and proximal popliteal arteries (PPA) in patients with lifestyle limiting claudication or rest pain. Key inclusion criteria included Rutherford Becker (RB) 2 through 4, SFA or PPA lesions between 40 and 140 mm, ? 3 cm above knee joint, and ? one vessel runoff. Primary safety endpoint was freedom from a composite of all death, clinically driven target lesion revascularization (TLR), or any amputation of the index limb at 30 (+7 days) and was compared to a performance goal (PG) of 88%. The primary effectiveness endpoint was SFA patency at 12 months (390 days), defined as freedom from restenosis (diameter stenosis >50% with a peak systolic velocity [PSV] ratio ? 2 by ultrasound) and TLR, and was compared to a PG of 66%. Mean age was 68.7 years and 36.4% were female. There were 43.5% diabetics, 79.9% were current or former smokers, and 9.1% had renal insufficiency. Mean lesion length was 78.1 mm and 72.7% had moderate to severe calcification. Primary patency (12 month) was 78.9% (VIVA method), which was superior to the PG 66% (P < .001). In the ITT population, freedom from TLR at 1, 2, and 3 years were 89%, 84% and 82%, respectively. In severely calcified lesions, 12-month patency was 89% and freedom from TLR at 3 years was 87%. In nominally deployed stents (± 10% stent length), a higher 12-month primary patency was observed (90%) compared with those not deployed to nominal (eg, elongated). Nominal deployment also resulted in high freedom from TLR at 1, 2, and 3 years (97%, 96%, and 94%). Severely elongated stents (> 40%) had the least durability through 3 years. There was only one stent fracture through 3 years. Proper artery preparation and Supera deployment result in patency and TLR rates that were among the best reported for SFA and PPA interventions. Nominal deployment or slight compression had the best outcomes and durability. In stents deployed to a nominal length, there was minimal decrease in freedom from TLR between 1 and 3 years, 97% to 94%. Results were good in complex lesions regardless of lesion length. There was a remarkably low fracture rate after 3 years.

The paclitaxel-coated Zilver PTX stent is the first drug-eluting stent approved for the superficial femoral artery. Previously, a large randomized controlled trial (RCT) and a complementary, large single-arm study supported the safety and effectiveness of the paclitaxel-coated stent. Currently, a multicenter, prospective, postmarket surveillance study is underway in Japan to further evaluate this stent in real-world patients. The first approximately 900 patients in Japan treated with the Zilver PTX stent were enrolled in the study. Twelve-month follow-up included evaluation of freedom from target lesion revascularization (TLR). Patency was evaluated by duplex ultrasound when this was standard of care. Furthermore, additional analyses were performed to evaluate the results in RCT-like lesions (? 14 cm, no in-stent restenosis [ISR]) versus more complex lesions. In this study, 907 patients were enrolled at 95 institutions in Japan. Compared to previous randomized and single-arm studies, these patients had significantly more renal disease (P < .01, 44%), longer lesions (P < .01; mean, 14.7 cm), more ISR (P < .01, 19%), and fewer patent runoff vessels (P < .01). Within this study, 378 lesions were RCT-like (mean lesion length, 7.4 cm), and 703 lesions were more complex (mean lesion length, 18.6 cm; 29% ISR). Twelve-month follow-up was obtained for > 95% of eligible patients. Freedom from TLR was 91.4% overall, 96.7% for RCT-like lesions, and 88.3% for more complex lesions. Duplex ultrasound was performed for approximately 60% of patients. For these patients, primary patency was 84.8% overall, 91% for RCT-like lesions, and 81% for more complex lesions. Despite more challenging lesions, the current post-market surveillance study results are similar to those from previous Zilver PTX studies. The results in more complex lesions provide further assurance of the benefit of the Zilver PTX stent in real-world patients.