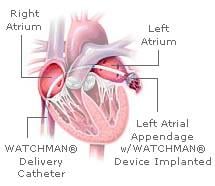 April 2, 2009 - A device implanted in the heart using minimally invasive techniques may replace the most widely prescribed drug for stroke prevention in patients with nonvalvular atrial fibrillation, according to research presented during the i2 Summit at the American College of Cardiology’s 58th annual scientific session in Orlando earlier this week.

In the Embolic Protection in Patients with Atrial Fibrillation (PROTECT AF) trial, researchers compared the current standard of therapy, anticoagulation with warfarin, to a fabric-covered expandable nitinol cage known as the WATCHMAN, which blocks blood clots that typically form in the left atrial appendage (LAA), an outpouching of the left atrium. They found that the WATCHMAN reduced by some 30 percent the combined risk of cardiovascular death and stroke (both ischemic – the type caused by a blood clot – and hemorrhagic – the type caused by excessive bleeding into the brain).

“Patients with atrial fibrillation have a six-fold increased risk of stroke and therefore require long-term anticoagulation therapy,” said David R. Holmes, Jr., M.D., Scripps professor of medicine at the Mayo Graduate School of Medicine, Rochester, MN. “The placement of this device results in excellent long-term outcomes – effective ischemic stroke prevention with the elimination of hemorrhagic strokes and major bleeding often associated with the use of warfarin.”

Atrial fibrillation is a common heart rhythm disorder that causes the upper chamber of the heart to quiver rather than squeeze blood out with each beat. When blood is allowed to pool in the atrium, it can form clots. Anticoagulation with warfarin has been proven effective for the prevention of clot-related strokes in atrial fibrillation, but it is used conservatively, largely because it can cause serious bleeding in some patients. It also necessitates regular blood tests and may require that patients restrict certain physical activities.

To implant the WATCHMAN, an interventional cardiologist guides the device into the heart through a catheter inserted in a vein in the upper leg. The catheter is threaded first into the right atrium, then into the left atrium through a puncture in the wall separating the two upper chambers of the heart. Once the catheter is positioned in the opening of LAA, the WATCHMAN is released and left permanently in place to block the formation and release of blood clots.

For the PROTECT AF study, 707 patients with nonvalvular atrial fibrillation were randomly assigned to closure of the LAA with the WATCHMAN device (463 patients), followed by discontinuation of warfarin, or to long-term treatment with warfarin (244 patients). The study found in over 900 patient-years of follow-up that the combined rate of stroke (ischemic and hemorrhagic) and cardiovascular death – the primary measures of effectiveness – was 3.4 per 100 patient-years in the device group vs. 5 per 100 patient-years in the warfarin group, a reduction of 32 percent (relative risk [RR], 0.68).

As for the safety of the device, the researchers observed more procedure-related complications in patients treated with the device (8.7 vs. 4.2 per 100 patient-years; RR, 2.08). Most complications were related to device implantation. However, after successful implantation of the WATCHMAN and discontinuation of warfarin therapy, complication rates were significantly lower with device therapy (1.7 vs. 4.2 per 100 patient-years; RR, 0.40).

The researchers concluded that the WATCHMAN is an effective alternative to warfarin therapy for preventing stroke in patients with atrial fibrillation.

“The take-home message is that although there are complications associated with implantation of the device, patients can avoid the need for chronic warfarin therapy, with all its attendant risks,” Holmes said.