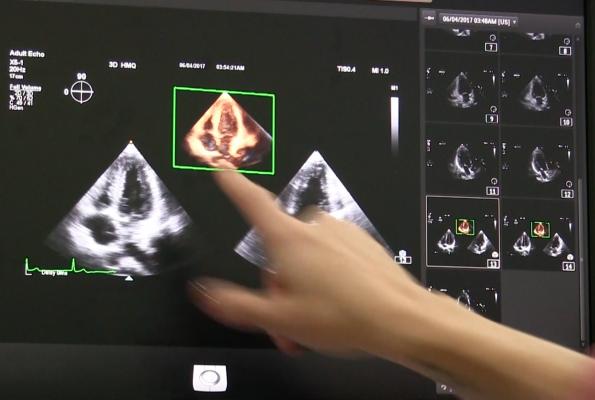 At an average age of 45 years, they found the plaque burden in subjects was more than twice as high in men as in women (63.4 cubic millimeters vs. 25.7), and higher in the femoral arteries, and with increasing age.

The study was published online in The Journal of the American College of Cardiology.

Researchers explored the bilateral carotid and femoral arteries of 3,860 middle aged participants without prior cardiovascular disease who were employees of the Banco de Santander in Madrid, Spain. This is an ongoing observational prospective cohort study where participants are being followed up for 10 years. The 3DVUS examinations were performed using a new Phillips iU22 ultrasound system equipped with a VL13-5 3D volume–linear array transducer. This equipment will be available in the near future for routine patient care.

The clinical application of 3DVUS techniques is still at the research and development stage, but there are now a number of clinically promising areas including the measurement of plaque. Direct quantification of atherosclerotic plaque volume by 3DVUS is more reproducible than two-dimensional techniques.

“3DVUS is a feasible, reproducible, and novel imaging technique for quantifying early carotid and femoral atherosclerotic burden in large populations,” said the study’s lead author, Valentin Fuster, M.D., Ph.D., director of Mount Sinai Heart and physician-in-chief of The Mount Sinai Hospital. “This novel method is valid for imaging superficial peripheral atherosclerosis burden from early to advanced stages of disease and can be applied to identification of individuals at risk, targeting or monitoring treatment. Further studies are needed, however, to assess the cost utility of this method compared with others when used in large-scale practice settings and population-based epidemiological studies.”

The study is part of an international initiative that is being conducted through partnerships with the National Center for Cardiovascular Research in Spain, the Icahn School of Medicine at Mount Sinai, and the Framingham Heart Study.