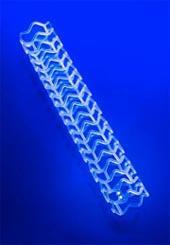 December 22, 2011 ­– Abbott today announced the initiation of ESPRIT I, a first-of-its-kind clinical trial in Europe evaluating the safety and performance of the novel Esprit drug-eluting bioresorbable vascular scaffold (BVS) for the treatment of blockages in the superficial femoral arteries (SFA) and iliac arteries. It will specifically target blockages that resulted in claudication (leg pain upon walking).

Claudication is the most common symptom in patients with peripheral artery disease (PAD), and is associated with diminished physical activity and poor quality of life for patients. The SFA and iliac arteries, located in the upper leg and pelvis, are common areas of blockage in patients with PAD. The first patient was treated with an Esprit BVS as part of the trial by Marc Bosiers, M.D., head of the Department of Vascular Surgery at St. Blasius Hospital in Dendermonde, Belgium.

The Esprit drug-eluting BVS is designed specifically for use in peripheral arteries and is made of polylactide, the same proven biocompatible material used in the company's Absorb drug-eluting BVS for coronary artery disease. Absorb is authorized for sale in Europe and is investigational in the United States. Esprit is designed to restore blood flow by opening a blocked vessel and providing support until it is healed. Once the vessel can remain open without the extra support, the scaffold is designed to dissolve, leaving the vessel free of a permanent metallic implant. Because a permanent implant is not left behind, clinical outcomes may be improved and options for retreatment of the vessel preserved.

"Treating blockages in the SFA is a clinical challenge, as there are unique biomechanical forces exerted on the SFA during normal leg movement, which can lead to restenosis or re-narrowing of the vessel," said Johannes Lammer, M.D., professor of radiology at the Medical University of Vienna, Austria, and principal investigator for the ESPRIT I trial. "Current endovascular therapies, such as self-expanding stents and angioplasty balloons, have limitations and have not solved the problem of restenosis. A bioresorbable drug eluting device, designed to act as a temporary scaffold to support the vessel and then fully dissolve, may change the way we treat peripheral artery disease."

The ESPRIT I trial is a single-arm, multi-center trial designed to evaluate the safety and performance of the Esprit therapy in approximately 30 patients with claudication resulting from PAD of the SFA or iliac arteries. Up to 10 clinical trial sites in Europe will participate in the trial. Patients will undergo clinical hemodynamic (blood movement), functional and quality-of-life follow-up at one, six and 12 months and at two and three years following the procedure.

"ESPRIT I is the first clinical trial to evaluate our bioresorbable technology in patients with disease in the SFA and iliac arteries," said Charles A. Simonton, M.D., FACC, FSCAI, divisional vice president, Medical Affairs, and chief medical officer, Abbott Vascular. "In addition to ESPRIT I, we also are investigating our bioresorbable therapy for the treatment of below-the-knee critical limb ischemia – a severe form of PAD – in the ABSORB BTK trial. We've seen promising long-term clinical data with our bioresorbable therapy in coronary patients, and we believe there is potential for this technology in the treatment of PAD."

The Esprit uses the same polymer and drug (everolimus) as the Absorb BVS, but has a novel stent design and comes in larger diameters and longer lengths. Esprit is currently investigational and is not available for sale.

Abbot also has the ongoing ABSORB BTK trial evaluating the safety and efficacy of Absorb for the treatment of below-the-knee (BTK) critical limb ischemia. Critical limb ischemia is a severe form of PAD that occurs when blocked vessels impair blood flow to the lower extremities, which can eventually lead to limb amputation. Abbott announced the initiation of the trial in September 2011.

Absorb has received CE mark and is authorized for sale in Europe for the treatment of coronary artery disease. In the U.S., Absorb currently is investigational and is not available for sale.