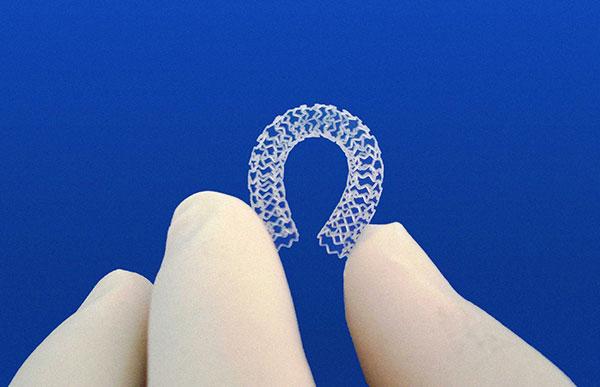 All patients have entered the nine-month follow-up period, which is expected to conclude by mid-2016. Juan F. Granada, M.D., chief scientific advisor of Amaranth and executive director and chief innovation officer of the CRF-Skirball Center for Innovation, presented findings from these studies on at the 2015 Transcatheter Cardiovascular Therapeutics (TCT) annual meeting this week.

"Preliminary findings of these important studies are very exciting and continue to highlight the competitive advantages of the technology. Fortitude demonstrated a high device success rate and excellent peri-procedural clinical outcomes in all patients enrolled," Granada said. "Our experience with this 150 micron scaffold has been quite positive, but without any doubt the future relies on the miniaturization of current BRS technologies, leading to easier navigation and a reduction of current thrombotic risk."

In addition, Amaranth announced plans to initiate RENASCENT-II, a study of a new 120 micron BRS. The study will take place in several centers in Italy and Colombia, South America with Antonio Colombo, M.D., director of the hemodynamics division at Ospedale San Raffaele in Milan, Italy, and Granada serving as co-primary investigators.

"We plan to apply for a CE mark following the conclusion of the nine-month patient follow-up period," added Kamal Ramzipoor, president and CEO of Amaranth. "If granted a CE mark, we would be in a position to commercialize our first product in 2017."

In addition to the 150- and 120-micron scaffolds, Amaranth's product pipeline includes the development of scaffolds under 100 micron wall thickness, which have demonstrated the ability to maintain biomechanical properties similar to previous generations of BRS. It is Amaranth's proprietary polymer's mechanical properties that enable the construction of scaffolds with strut thicknesses similar to those of metallic drug-eluting stents, without compromising on the key attributes such as radial strength, surface area and recoil.

"We believe that Amaranth is in a unique position to continue the miniaturization process of their devices while retaining the optimal biomechanical properties demonstrated in their earlier generation devices, including enhanced deliverability and treatment of more complex atherosclerotic lesions, thus becoming a trend setter in the bioresorbable scaffold field," Granada concluded.