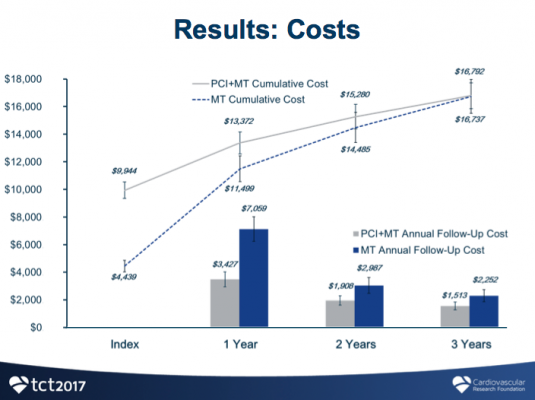 The Fractional Flow Reserve versus Angiography for Multivessel Evaluation 2 (FAME 2), a prospective, international, randomized, controlled trial investigated whether contemporary FFR-guided PCI plus medical therapy would be superior to medical therapy alone in patients with stable coronary artery disease and functionally significant stenoses, as determined by FFR. Data were collected from 28 sites in the U.S. and Europe. The study enrolled patients with stable angina and angiographically documented CAD (one, two, or three-vessel) suitable for PCI with current generation drug-eluting stents. Patients with stable angina and at least one coronary lesion with an abnormal FFR were randomized to either medical therapy (MT) alone or to PCI with MT.

Among 1,220 patients enrolled, 888 patients had at least one stenosis with an FFR ≤0.80 and were randomly assigned to PCI plus MT (447 patients) or to MT alone (441 patients). Enrollment was stopped early based on advice from the Data Safety Monitoring Board because a significant difference had developed in the primary endpoint.

Costs were calculated based on resource utilization using Medicare reimbursement rates, and QALY were calculated using the EuroQuol 5D health survey with U.S. weights. The difference in QALY of a patient was calculated by multiplying years and change in health utility from baseline.

"In clinical practice, FFR is a useful tool to help doctors determine their strategy for a PCI, but FFR's long-term clinical benefits and cost-effectiveness have not been known until now," said co-principal investigator William F. Fearon, M.D., professor of cardiovascular medicine, Stanford University School of Medicine. "This analysis showed that FFR-guided PCI in combination with medical therapy worked better than medical therapy alone after three years and saved money. Compared with medical therapy alone, performing PCI in patients with stable CAD and at least one coronary lesion with an abnormal FFR leads to improved clinical outcomes, less angina, and improved quality of life at similar cost over three years of follow-up. With better clinical outcomes at similar cost, PCI of coronary lesions with reduced FFR is an economically attractive strategy.”

Analysis showed that 90 percent of patients in the FFR-PCI group were free from experiencing MACE, while twice as many patients in the medical therapy group experienced MACE (10.1 vs. 22 percent, p<0.001). The lower rate of MACE in the PCI group was largely driven by reduced urgent revasculartization, a component of MACE (4.3 vs. 17.2 percent, p<0.001). There were no significant differences in rates of death or myocardial infarction between the FFR-PCI and medical therapy only groups (8.3 vs. 10.4 percent, p=0.28).

After three years, patients who received FFR-guided PCI had significantly improved quality of life as measured by quality-adjusted life years (QALY), compared to patients who received medical therapy alone (0.105 QALY vs. 0.004 QALY; p<0.0001). While initial costs were higher for FFR-guided PCI, the treatment was associated with substantially less follow-up costs than medical therapy alone, resulting in comparable total costs between the two groups over three years ($16,792 vs. $16,737, p=0.94).  The resulting incremental cost-effectiveness ratio (ICER), which is calculated to determine economic value between two therapies, showed that FFR-guided PCI had an ICER of $1,600/QALY, well below the commonly accepted threshold of $50,000/QALY for cost-effectiveness.

The FAME 2 trial was funded by St. Jude Medical but this subanalysis was not supported by industry funding or a research grant. Dr. Fearon reported institutional research support from Medtronic, Abbott Vascular, ACIST Medical, CathWorks, and Edwards Lifesciences, as well as minor stock options with HeartFlow.

Read the related article "What is New in FFR Technology."