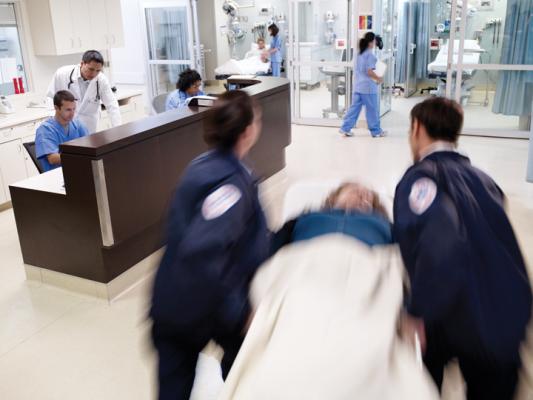 April 19, 2016 — Researchers have confirmed that certain heart rhythm medications, when given by paramedics to patients with out-of-hospital cardiac arrest who had failed electrical shock treatment, improved likelihood of patients surviving transport to the hospital.

The study was published online in the New England Journal of Medicine and helps answer a longstanding scientific question about the effectiveness of two widely-used antiarrhythmic drugs, amiodarone and lidocaine, for treating sudden cardiac arrest.

“This trial shows that amiodarone and lidocaine offer hope for bringing patients back to life and into the hospital after cardiac arrest,” said principal study author Peter Kudenchuk, M.D., a cardiac electrophysiologist at the University of Washington Medical Center in Seattle. “While the overall increase in survival to hospital discharge of about 3 percent with amiodarone was not statistically significant, it came very close. Importantly, there was a significant improvement in survival to hospital discharge with either drug when the cardiac arrest was bystander-witnessed.” A bystander-witnessed cardiac arrest is one that is witnessed by another person.

Sudden cardiac arrest is a condition in which the heart suddenly or unexpectedly stops beating, cutting off blood flow to the brain and other vital organs. More than 300,000 people are treated for out-of-hospital cardiac arrest each year, with the vast majority occurring at home, according to the American Heart Association. Studies show that nationally only about 10 percent of people who suffer cardiac arrest outside the hospital survive.

Effective treatments, such as CPR and defibrillation, can greatly increase a victim’s chance of survival. This study adds the possibility of additional benefit from the use of the heart rhythm medications.

EMS (emergency medical services) providers commonly use antiarrhythmic drugs for out-of-hospital cardiac arrest that is not responsive to defibrillation shocks to the heart for restoring its normal rhythm. However, doctors remain unclear whether these drugs have proven survival benefit or if any benefit might be undone by possible drug side effects. As a result, use of these treatments by paramedics varies.

The three-year study began in 2012, and randomized 3,026 patients with out-of-hospital cardiac arrest caused by ventricular fibrillation and ventricular tachycardia, life-threatening rhythms of the heart’s lower pumping chambers that are often resistant to electrical shock.

Researchers assigned the patients to treatment with amiodarone, lidocaine or neither drug (a saline placebo) by rapid injection, along with all other standard resuscitation treatments. The study was conducted by the Resuscitation Outcomes Consortium, which includes clinical sites in the United States and Canada.

“Survival among the approximately 1,900 patients in the study whose cardiac arrest was witnessed by a bystander was improved significantly, from about 23 percent to 28 percent, by either drug,” Kudenchuk said.  Better than half of study participants fit this bystander-witnessed category, a group that was identified before the study began as potentially more likely to respond to such treatment. “This suggests treating patients as soon as possible after their collapse might be a critical determinant of whether drugs like amiodarone or lidocaine will have a significant clinical effect,” he added.

“I’m encouraged by the fact that though seemingly small, the 3-5 percent increase in survival reported in this trial means 1,800 additional lives could potentially be saved each year from cardiac arrest,” Kudenchuk said. “We can and should strive to improve our treatments for this all-too-common event. We believe this study is a significant step in that direction.”

Adverse effects from the drugs were infrequent, and scientists are continuing to analyze findings from the trial to gain additional insight into its results.

Funding for this study was provided by NHLBI in partnership with the U.S. Army Medical Research & Material Command, the Canadian Institutes of Health Research, the Heart and Stroke Foundation of Canada, and the American Heart Association.

The study was presented at the American College of Cardiology 2016 Scientific Sessions, April 2-4 in Chicago.