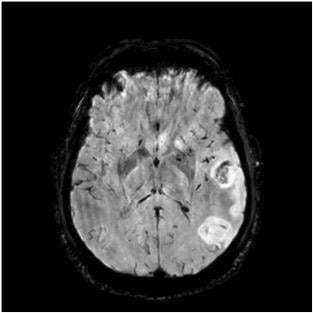 January 25, 2018 – Advances in brain imaging can identify a greater number of stroke patients who can receive therapy later than previously believed, according to a new study. The results of the Endovascular Therapy Following Imaging Evaluation for the Ischemic Stroke (DEFUSE 3) trial, presented at the International Stroke Conference 2018 in Los Angeles and published on Jan. 24 in the New England Journal of Medicine, demonstrated that physically removing brain clots up to 16 hours after symptom onset in selected patients led to improved outcomes compared to standard medical therapy. The study was funded by the National Institute of Neurological Disorders and Stroke (NINDS), part of the National Institutes of Health (NIH).

“These striking results will have an immediate impact and save people from life-long disability or death,” said Walter Koroshetz, M.D., director NINDS. “I really cannot overstate the size of this effect. The study shows that one out of three stroke patients who present with at-risk brain tissue on their scans improve and some may walk out of the hospital saved from what would otherwise have been a devastating brain injury.”

DEFUSE 3 was a large, multi-site study supported by NINDS’ StrokeNet, which is a network of hospitals providing research infrastructure for multi-site clinical trials. This study was conducted at 38 centers across the United States and was led by Gregory W. Albers, M.D., professor of neurology and neurological sciences at Stanford University School of Medicine, in California, and director of the Stanford Stroke Center. The study was ended early by the NIH on recommendation of the independent Data and Safety and Monitoring Board because of overwhelming evidence of benefit from the clot removal procedure.

Ischemic stroke occurs when a cerebral blood vessel becomes blocked, cutting off the delivery of oxygen and nutrients to brain tissue. Brain tissue in the immediate area of the blockage, known as the core, cannot typically be saved from dying, and it can enlarge over time. However, it has long been thought that the area surrounding the core (known as the ischemic penumbra) has the potential to be saved based on how quickly the blood flow can be restored. Over the past two decades, scientists have been working to develop brain scanning methods, called perfusion imaging, that could identify patients with brain tissue that can still be salvaged by removing the blockage. In perfusion imaging, a standard dye is injected and scanned for a few minutes as it passes through the brain.

Using an automated software known as RAPID to analyze perfusion magnetic resonance imaging (MRI) or computed tomography (CT) scans, the DEFUSE 3 researchers identified patients thought to have salvageable tissue up to 16 hours after stroke onset. The participants were randomized to either receive endovascular thrombectomy plus standard medical therapy or medical therapy alone.

Endovascular thrombectomy, or the physical removal of the blockage, is currently approved for use up to six hours following onset of stroke symptoms. Albers and the DEFUSE 3 researchers discovered that this intervention can be effective up to 16 hours after symptoms begin in this select group of patients. The findings showed that patients in the thrombectomy group had substantially better outcomes 90 days after treatment compared to those in the control group. For example, 45 percent of the patients treated with the clot removal procedure achieved functional independence compared to 17 percent in the control group. In addition, thrombectomy was associated with improved survival. According to the results 14 percent of the treated group had died within 90 days of the study, compared to 26 percent in the control group.

“Although stroke is a medical emergency that should be treated as soon as possible, DEFUSE 3 opens the door to treatment even for some patients who wake up with a stroke or arrive at the hospital many hours after their initial symptoms,” said Albers.

DEFUSE 3 builds on results from the two earlier DEFUSE studies as well as the industry-sponsored DAWN trial, which used perfusion imaging technology to identify patients most likely to benefit from interventions such as thrombectomy. Those studies suggested that the advanced brain imaging could identify which patients could benefit from restoring blood flow in an extended treatment window.