Carotid Surgery Versus Stenting Have Similar Long-term Effects on Stroke 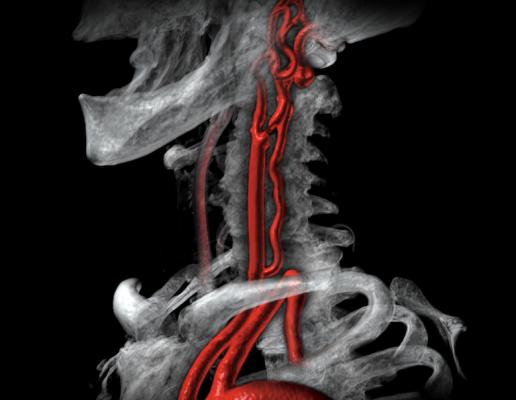 A 3-D CT reconstructed image showing a narrow lesion at the carotid bifurcation. ACST-2 was the largest trial to compare the long-term effect of carotid artery stenting (CAS) and carotid endarterectomy (CEA) on stroke in asymptomatic patients with a severely narrowed carotid artery that had not yet caused a stroke. Image by Canon

“We have shown that, for patients with a severely narrowed carotid artery, stenting and surgery have similar effects on the chances of having a disabling or fatal stroke. The risk from each procedure is about 1%. After that, however, the annual risk over the next five or more years is halved, from 1% down to 0.5% per year,” explained principal investigator Professor Alison Halliday of the University of Oxford, U.K.

ACST-2 was the largest trial to compare the long-term effect of CAS versus CEA on stroke in asymptomatic patients with a severely narrowed carotid artery that had not yet caused a stroke. The trial enrolled patients with severe carotid artery narrowing (60% or more reduction in diameter on ultrasound) found by chance, but with no recent stroke or other neurological symptoms. Participants were thought by their doctor to need CAS or CEA but both doctor and patient were substantially uncertain about which procedure was preferable.

A total of 3,625 patients were enrolled from 130 centres in 33 countries. Participants were randomly allocated 1:1 to CAS or CEA and followed up for an average of five years. The main outcomes were: 1) procedural risks (morbidity and mortality within one month after the procedure); and, most importantly, 2) non-procedural stroke, subdivided by severity.

ACST-2 is currently funded from the core support from the Medical Research Council (MRC), the British Heart Foundation, and Cancer Research UK for the University of Oxford’s NDPH. The trial had grants from the BUPA Foundation (BUPAF/33a/05) and National Institute for Health Research Health Technology Assessment program (HTA06/301/233) until 2013.