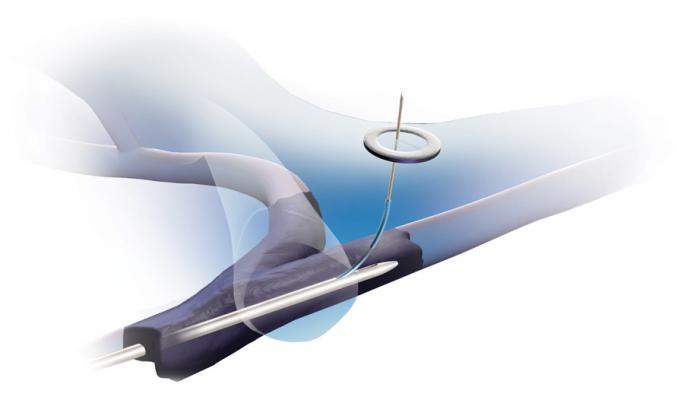 May 6, 2021 - Bluegrass Vascular Technologies announced the publication of a report documenting the clinical utility of the its Surfacer System to gain venous access prior to the placement of cardiac resynchronization therapy (CRT) device leads in a patient with obstructed central veins.

The paper, published in Clinical Case Reports,[1] adds to the body of evidence which supports the use of the Surfacer System to gain vascular access in patients who require venous access but have occlusions and damaged vessels which preclude the ability to access the central vasculature for electrophysiology (EP) device lead placements.

For the present paper, the Surfacer System was utilized to gain central venous access which facilitated placement of three cardiac leads prior to the placement of an implantable CRT defibrillator in a patient with bilateral occluded brachiocephalic veins and an occluded superior vena cava. The procedure was performed with Professor Aldo Rinaldi, a Consultant Cardiologist at Guy's and St Thomas' Hospital in London. The patient had an extensive history of central venous stenosis and occlusions associated with the placement of previous CRT devices with a history of facial swelling and bilateral arm edema resulting from the above. Prior the procedure described in the paper, the patient was implanted with a leadless pacemaker system due to unsuccessful attempts to gain central venous access using a recanalization procedure.

“The development of central venous occlusions is common in patients with permanent transvenous pacing leads and can become challenging when the need arises to replace these leads or a CRT device, “stated the paper's co-author Stephen Black, M.D., professor of venous surgery at King's College London and Consultant Vascular Surgeon at Guy’s and St Thomas’ Hospital in London, U.K. “The Surfacer System enabled us the ability to access the central venous system and then safely place standard transvenous leads and position a cardiac defibrillator in the preferred upper chest location for a patient who had extensive venous occlusions and failed a previous attempt to obtain central venous access.”

This proprietary Inside-Out approach allows for the placement and maturation of permanent arteriovenous access options that are associated with improved patient outcomes and reduced cost of care for both hospitals and hemodialysis providers. The Surfacer System has received FDA De Novo device clearance in the U.S. and is CE marked in Europe. The device is currently distributed in North America and Europe by Merit Medical, a global manufacturer and distributor of medical devices.