Clinical Trials on Venous Care presented at THE VEINS 2022

Results from the first session of Late-Breaking Clinical Trials were presented on Oct. 31 during The VEINS conference, hosted in Las Vegas, NV, announced by the VIVA Foundation. 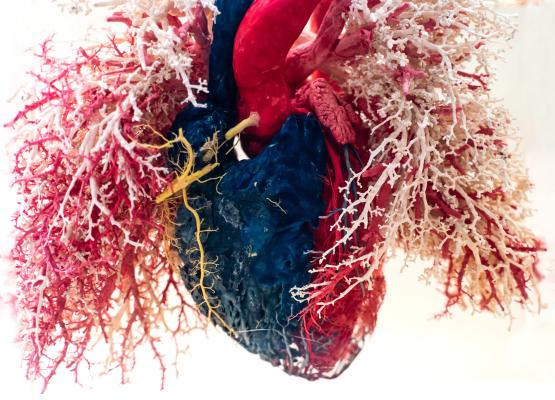 October 31, 2022 — Results from the Late-Breaking Clinical Trials session at The VEINS Conference in Las Vegas, NV, were announced on Oct. 31 by the VIVA Foundation, a not-for-profit organization dedicated to advancing the field of vascular medicine and intervention through education and research. The VEINS (Venous Endovascular INterventional Strategies) is an annual venous education symposium where global, multispecialty faculty to present a comprehensive variety of talks and case presentations focused on venous care.

Highlights follow on the six late-breaking clinical trial presentations as released by the organization:

The primary endpoint was complete or near-complete (≥ 75%) thrombus removal, assessed by an independent core laboratory. The primary endpoint was achieved in 91.2% of limbs, and the 30-day device-related SAE rate was 0.2%. Nearly all procedures were single session (99.4%), median estimated blood loss was low (40.0 mL), and only 2.2% of patients received overnight post-thrombectomy intensive care unit monitoring. Patient symptoms (eg, pain and edema) were significantly reduced at discharge and showed sustained improvement through 30 days.

This analysis of the CLOUT registry, according to researchers, shows the excellent safety profile and effective thrombus removal of mechanical thrombectomy with the ClotTriever system in a real-world DVT patient population.

The 3-year outcomes of the ABRE study support the safety and effectiveness of the Abre venous self-expanding stent (Medtronic) when used to treat symptomatic iliofemoral venous outflow obstruction across all initial clinical presentations. Participants who received an Abre venous stent reported clinically significant improvement in QOL and functional outcome measures through 3 years when compared to baseline.

“Propensity Score–Matched Analysis of Early Clinical Outcomes From the CLOUT and ATTRACT Studies,” presented by Steven Abramowitz, MD, was a reference trial evaluating interventional treatment for deep vein thrombosis (DVT). Researchers reported that it no added benefit compared to anticoagulation, noting that new interven­tions have emerged since the completion of ATTRACT, and their comparative effectiveness is unknown. Using propensity score–matched data, the team compared outcomes from the largest mechanical thrombectomy study, the CLOUT registry, with those from the ATTRACT trial.

No significant differences in baseline characteristics remained after matching. Rates of stenting and venoplasty were similar between the groups and, as expected based on differences in mechanism of action, rates of thrombolytic use and postprocedural hospital overnights were significantly different.

“Single-Session Thrombectomy for the Treatment of Iliofemoral Deep Venous Thrombosis (DVT) Is Associated with Reduced ICU Cost When Compared with Thrombolysis,” presented by John Filtes, MD, was also one of the first late-breaking trials reported.

The authors noted that lower extremity deep vein thrombosis (DVT) is a major cause of morbidity in the United States, with significant associated health care costs. For iliofemoral DVT, catheter-directed therapies lead to reduction in venous hypertension and inflammatory response to the acute thrombus, thereby reducing clinically significant chronic venous insufficiency, also known as postthrombotic syndrome. Mechanical thrombectomy devices have recently been developed that remove the thrombus using a combination of suction techniques—without the need for thrombolytics—and allow for stenting in a single session.

In this retrospective review of all patients who underwent thrombectomy and thrombolysis for the treatment of iliofemoral DVT (at two large medical centers in the 10-year period from 2011 to 2021), researchers sought to compare costs of postprocedural intensive care for patients treated with single-session mechanical thrombectomy versus thrombolysis for DVT (often double-session). Thrombolysis was associated with approximately $6,000 of additional intensive care costs compared with single-session thrombectomy. Also, thrombolysis incurred the additional cost of thrombolytics, which were not used for thrombectomy. The research team noted that future studies will aim to analyze total health care costs associated with treatment of DVT, inclusive of ICU, procedure, and physician costs.

Results from the “First-in-Human Study Results With Amplifi Vein Dilation System Treatment,” were presented by Surendra Shenoy, MD, PhD. It was noted that three million patients worldwide with end-stage renal disease (ESRD) need reliable vascular access for hemodialysis. A forearm arteriovenous fistula (AVF) that has fewer complications and preserves proximal sites for future access is the best initial access option. However, maturation failure of forearm AVF is as high as 85% and only 32% of AVFs are attempted in the forearm. Small vein diameter strongly correlates with maturation failure; 6-mm veins have a 75% probability of maturation versus 10% for 3-mm veins.

The first cohort of five ESRD patients in a prospective, nonrandomized, single-arm, open-label, first-in-human clinical study were treated at Sanatorio Italiano in Asunción, Paraguay, between Q1 and Q3 2021. A second cohort was treated in Q3 2022. Mean treatment duration was 8.6 days in cohort 1 and 6.3 days in cohort 2. All AVFs in cohort 2 were created in the forearm. After treatment, an AVF was created with a treated vein, and ultrasound examination was performed at day 1, week 2, and week 6. Treatment with the Amplifi system resulted in a 151% increase in cephalic vein diameter, with a 134% concomitant increase in flow rate. AVFs made with treated veins were fully mature within 2 weeks, and all patients were cleared for hemodialysis using their AVFs by week 6. The presented noted that the Amplifi system is in development and not available for commercial use.

Findings of the “Improvement in Clinical and Echo Parameters After Computer-Aided Mechanical Aspiration Thrombectomy for Treatment of Acute Pulmonary Embolism,” trial were presented by Elias Iliadis, MD.

Changes in clinical findings after treatment of acute pulmonary embolism (PE) with mechanical aspiration thrombectomy may lend insight into the timing of recovery from the index event. In published studies of PE patients, right heart function can be evaluated by echocardiography and provide additional measures of right heart function. The purpose of this study was to evaluate improvement in clinical and echocardiographic parameters after treating acute PE patients with computer-aided mechanical aspiration thrombectomy with the Indigo Lightning 12 aspiration system (Penumbra, Inc.).

Sixty-three patients were treated. Most had submassive PE (83%), and 97% were bilateral. Posttreatment, there was significant reduction in clinical variables of heart rate (73% vs 8%), episodes of hypotension (27% vs 3%), hypoxia (16% vs 0%), and Pulmonary Embolism Severity Index scores (117 vs 83). There was improvement in echocardiographic parameters, including pulmonary artery (PA) pressure, median right ventricular/left ventricular ratio, PA compliance, median acceleration time, and median tricuspid annular plane systolic excursion. Average thrombectomy time was 18 minutes, and estimated blood loss was 381 mL.

Treatment of acute PE with computer-aided mechanical aspiration thrombectomy resulted in rapid improvement of vital signs and right heart function, as measured by echocardiography. This was accomplished with a short procedure time and an acceptable safety profile. 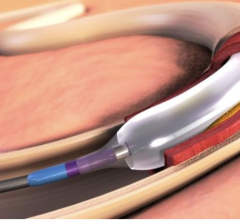 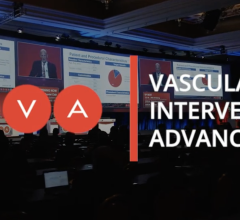 November 2, 2022 — The second round of late-breaking clinical trial results were announced at VIVA22 on Nov. 1 in Las ... 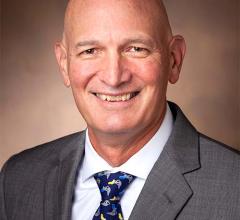 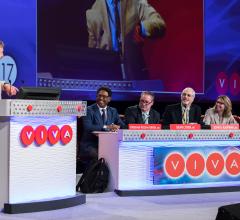 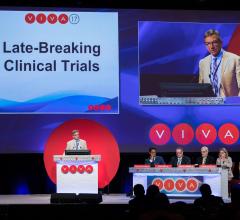