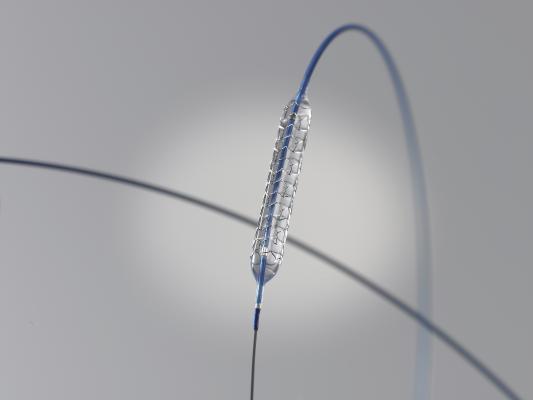 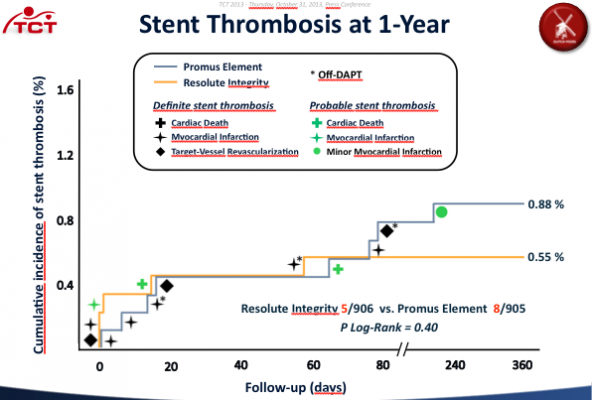 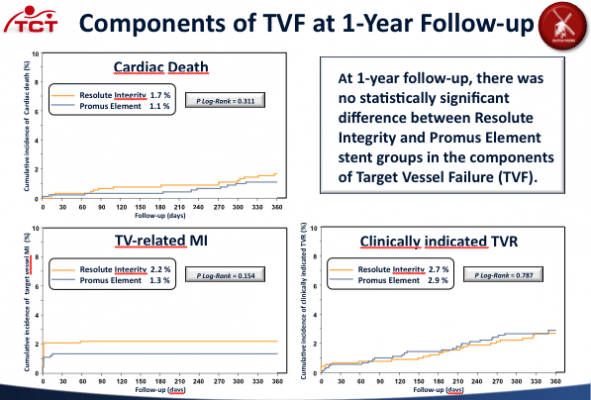 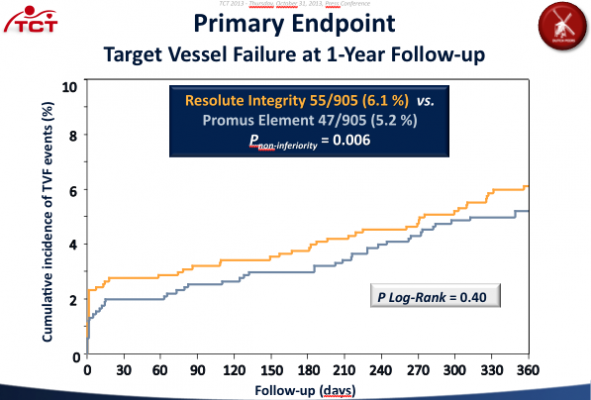 November 1, 2013 – In the first head-to-head randomized controlled trial of third-generation durable-polymer drug-eluting stents for the treatment of coronary artery disease in an all-comers patient population, the Medtronic Resolute Integrity and the Boston Scientific Promus Element performed similarly on all measures except longitudinal strength, which favored the Medtronic device.

A total of 1,811 patients were randomly assigned to treatment with third-generation cobalt-chromium zotarolimus-eluting stents (906 patients; 1,205 lesions) or platinum-chromium everolimus-eluting stents (905 patients; 1,166 lesions). The study population (age 63.9±10.8 years, range 21–91 years; 73.0 percent male) was an “all-comers” population comprising 58.6 percent of patients with acute coronary syndromes (20.4 percent of all patients presented with an acute ST-elevation myocardial infarction). Of all 2,371 lesions, 65.7 percent were ACC/AHA lesion type B2/C. Follow-up data for 99.9 percent of the randomized patients were obtained.

“The clinical outcome of this trial was excellent – particularly when considering its high proportion of complex patients with acute myocardial infarction at presentation – and may represent a challenging touchstone of novel stents and scaffolds,” said Clemens von Birgelen, M.D., Ph.D., the principal investigator of the trial. Von Birgelen is co-director of the Department of Cardiology at Thoraxcentrum Twente and professor of cardiology at University of Twente in the Netherlands.

“Both permanent polymer-based stents were similarly efficacious and safe in treating all-comers with an excellent clinical outcome,” von Birgelen said.

While the incidence was low, the difference in stent thrombosis between Resolute and Promus was discussed in sessions at TCT. Mamas A. Mamas, BM, BCh, MA, DPhil, MRCP, from Manchester Institute of Cardiovascular Sciences, U.K., offered an analysis of the FDA's Manufacturer and User Facility Device Experience (MAUD) database to examine real-world reported cases of coronary stent fractures that can lead to stent thrombosis. He found longitudinal stent deformation was the most commonly listed cause of stent strut fractures. Of all cases reported between 2010 and 2011, 80 percent (34 of the cases reported) involved the Promus element. Mamas added most of these fractures occurred in complex lesions, such as ostial, bifurcation, severe angulations and long lesions.