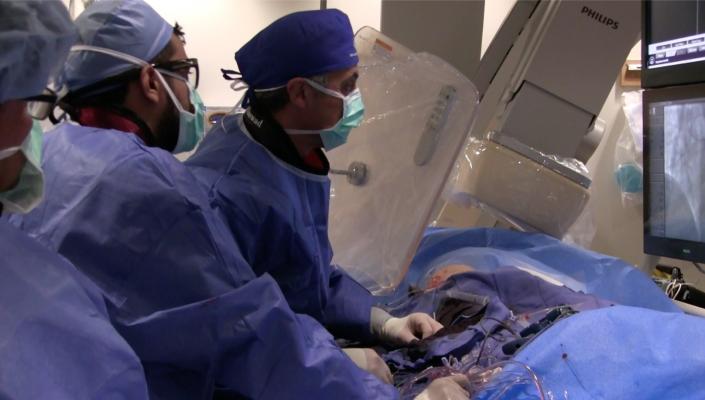 September 10, 2019 — An international randomized trial has shown that complete revascularization reduces major cardiovascular events compared to culprit lesion-only percutaneous coronary intervention (PCI). Late breaking results of the COMPLETE trial were presented in a Hot Line Session at the European Society of Cardiology (ESC) Congress 2019 together with the World Congress of Cardiology, and published in the New England Journal of Medicine.[1]

Up to 50 percent of patients with ST-segment elevation myocardial infarction (STEMI) have multivessel coronary artery disease. This means that in addition to the blocked artery that caused the heart attack (known as the culprit artery), they have additional narrowed arteries (called non-culprit) supplying blood to the heart.

In STEMI patients, opening the culprit artery with PCI reduces cardiovascular death or myocardial infarction. It is unclear whether additional PCI of non-culprit lesions also prevents these events.

Observational studies suggest a reduction in clinical events with staged, non-culprit lesion PCI, but are limited by selection bias and confounding. Prior randomized trials found declines in composite outcomes with non-culprit lesion PCI but were not powered to detect improvements in hard, irreversible clinical outcomes such as cardiovascular death or new myocardial infarction. While meta-analyses indicate a decline in cardiovascular death or myocardial infarction with non-culprit lesion PCI, there has been no single, large trial showing benefit on this clinically important outcome. The COMPLETE trial was designed to address this evidence gap.

A total of 4,041 patients with STEMI and multivessel coronary artery disease were enrolled from 140 centers in 31 countries. Patients were randomly allocated to complete revascularization with additional PCI of angiographically significant non-culprit lesions, or to no further revascularization. Randomization was stratified by the intended timing of non-culprit lesion PCI: either during or after the index hospitalization.

At a median follow-up of three years, the first co-primary outcome of cardiovascular death or myocardial infarction occurred in 158 patients (7.8 percent) in the complete revascularization group compared to 213 (10.5 percent) in the culprit-lesion only group (hazard ratio [HR] 0.74; 95 percent confidence interval [CI] 0.60–0.91; p=0.004).

There were no significant differences between groups in the occurrence of stroke (p=0.27) or major bleeding (p=0.15).

Mehta said, “COMPLETE is the first randomized trial to show that complete revascularization reduces hard cardiovascular events compared to culprit-lesion only PCI in patients with STEMI and multivessel coronary artery disease. The benefits emerged over the long term and were observed regardless of whether non-culprit lesion PCI was performed early, during the initial hospitalization or shortly after hospital discharge. These findings are likely to have a large impact on clinical practice and prevent many thousands of recurrent heart attacks globally every year.”