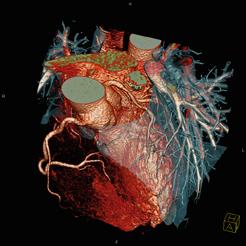 June 27, 2011 — Researchers may have discovered one reason that African-Americans are at increased risk for heart attacks and other cardiovascular events.

According to a new study published online in the journal Radiology, African-Americans have increased levels of non-calcified plaque, which consists of buildups of soft deposits deep in the walls of the arteries that are not detected by some cardiac tests. Non-calcified plaque is more vulnerable to rupturing and causing a blood clot, which could lead to a heart attack or other cardiovascular event.

“For a long time, physicians have searched for explanations as to why African-Americans have higher rates of heart disease and higher cardiac death rates, but less coronary artery calcium than Caucasians,” said U. Joseph Schoepf, M.D., professor of radiology and medicine and director of cardiovascular imaging at Medical University of South Carolina in Charleston. “We show that one possible explanation for the discrepancy may be found in the higher rate of less stable, non-calcified plaque in the heart vessels of African-Americans.”

For the study, researchers compared 301 patients who underwent both calcium scoring with CT and contrast-enhanced coronary CT angiography (cCTA). cCTA provides a more comprehensive picture of the arteries, including the presence of non-calcified and mixed plaques.

The study group comprised 50 percent each of African-American and white patients, 33 percent of whom were male (mean age 55).

Based on these results, the researchers suggest that the value of calcium scoring as a screening tool for African-Americans should be reexamined.

“The results of coronary artery calcium scoring studies are to be treated with caution in African-Americans, because they may not reflect the true extent of cardiovascular disease,” Dr. Schoepf said.

While cCTA does expose patients to ionizing radiation, according to Dr. Schoepf, the effective dose of this procedure has been considerably reduced over the past few years, making it a viable screening option if other prerequisites of a successful screening test are also met.

“For African-American patients, coronary CT angiography may be a more appropriate screening tool for cardiovascular risk,” he said.