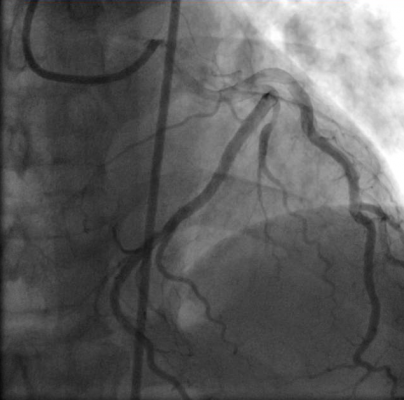 May 15, 2018 — A contemporary, real-world analysis shows lower mortality rates when culprit-only intervention is used for patients with multivessel disease (MVD) and acute myocardial infarction (AMI) with cardiogenic shock (CS). In a new study, percutaneous coronary intervention (PCI) of the culprit vessel was associated with improved outcomes, despite the majority of these patients having multivessel disease (MVD). The data was presented as late-breaking clinical science at the 2018 Society for Cardiovascular Angiography and Interventions (SCAI) Scientific Sessions.[1]

Whether or not PCI of non-culprit disease in the acute setting improves outcomes is unclear. The results of this new study come on the heels of the recent randomized CULPRIT-SHOCK trial[1] that was the first to find revascularization of all significant non-culprit lesions worsens outcomes. The late-breaking clinical science study is the most recent study to compare the two PCI strategies in this patient population.

The study assessed culprit vessel intervention (CVI) versus MVI in 649 patients with AMI, CS and MVD that were enrolled in the British Columbia Cardiac Registry (2008-2014). All-cause mortality was evaluated at 30 days and one-year.

“The comparison between culprit-only and multivessel intervention is a hot topic of conversation and debate in our field, and the results of our study add to the recent CULPRIT-SHOCK trial and help us better understand the positive outcomes of a culprit-only approach,” said lead author Bilal Iqbal, M.D., Victoria Heart Institute Foundation, Canada. “The CULPRIT-SHOCK trial is the largest body of randomized evidence in the CS population. The recent Korean registry has shown that MVI may be better, but there are differences in the definition of MVI, making comparison difficult. Importantly, in CULPRIT-SHOCK and our study, MVI was defined as non-culprit PCI at the time of index intervention, and CVI was defined as PCI of culprit vessel only at the time of index intervention. Whereas in the Korean registry, MVI included non-culprit PCI, even if it were performed as an in-hospital staged procedure. Thus, it is conceivable that by adopting the definition of CVI used in our study and CULPRIT-SHOCK, the Korean study may have yielded different results.”

The authors call for more randomized studies to further evaluate the two PCI strategies for this patient population in order to gain a better understanding of the safety and feasibility of culprit-only lesion approach.