First-ever reversal agent for a common class of anticoagulants is shown to be effective, safe 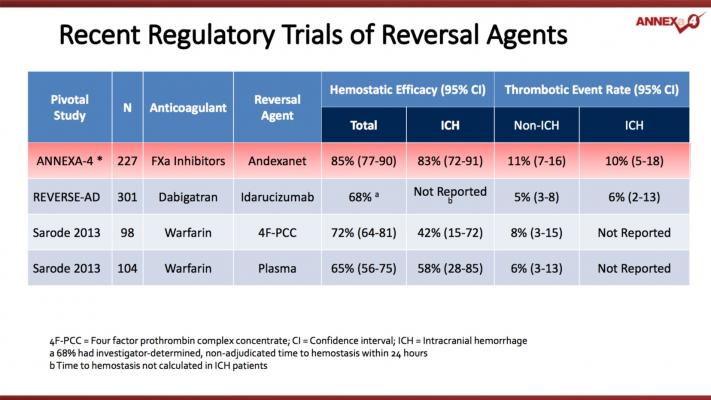 March 22, 2018 — The experimental drug andexanet was associated with control of serious bleeding in patients taking a common class of anticoagulants known as Factor Xa inhibitors, according to interim clinical trial results presented at the American College of Cardiology’s 67th Annual Scientific Session. Millions of patients take Factor Xa inhibitors, which elevate the risk of serious bleeding. If approved by the FDA, andexanet would be the first agent available to directly reverse the effects of Factor Xa inhibition if bleeding occurs.

Factor Xa inhibitors, which inhibit a protein involved in the formation of blood clots, are commonly prescribed for patients who are at high risk for stroke and venous thrombosis (dangerous blood clots in the blood vessels). Because Factor Xa inhibitors and other anticoagulants reduce the body’s ability to form a blood clot, these drugs can also increase the risk of uncontrolled bleeding. When this happens, it can be challenging for doctors to stop the bleeding and can ultimately lead to death. For example, about 25 percent of patients who experience bleeding in the brain while taking a Factor Xa inhibitor die.

About 2.9 million people in the U.S. currently take Factor Xa inhibitors. Of these people, most are older and have illnesses, such as heart failure, that put them at high risk for cardiovascular problems. According to a recent analysis of the MarketScan Commercial and Medicare databases, roughly 84,000 patients taking Factor Xa inhibitors are hospitalized for major bleeding each year. The most common types of major bleeds include bleeding in the brain, sometimes resulting from a fall, and gastrointestinal bleeding.

Andexanet is a recombinant modified Factor Xa molecule designed to bind to and disable Factor Xa inhibitors, thereby allowing Factor Xa produced by the body to play its normal role in the formation of blood clots. In earlier trials performed in healthy volunteers, andexanet was shown to rapidly reverse the anticoagulant effect of Factor Xa inhibitors without any significant safety problems.

ANNEXA-4 is an ongoing clinical trial that uses andexanet to help treat patients experiencing major bleeding while taking Factor Xa inhibitors. The interim analysis being reported at ACC.18 includes data on safety outcomes for 227 patients and adjudicated efficacy outcomes for 132 patients enrolled at centers in the U.S., Canada and Europe. All trial participants presented with acute major bleeding within 18 hours of taking one of four Factor Xa inhibitors (apixaban, rivaroxaban, edoxaban or enoxaparin). Patients received an injection of andexanet followed by a two-hour infusion of the drug, with the dosage determined based on the specific Factor Xa inhibitor the patient was taking and how long it had been since the last dose.

Safety of andexanet was assessed in all 227 patients. At 30 days, 12 percent of patients had died and 11 percent had a thrombotic event (stroke, heart attack or blood clot in the legs). According to Connolly, these rates of adverse events are in line with what would be expected given the underlying medical condition of the patients in the trial and the fact that many had not resumed anticoagulant treatment during the 30 days after receiving andexanet.

“This study is only focused on patients who are acutely bleeding, but there is also great interest in using a drug like andexanet for patients who come into a medical center on a Factor Xa inhibitor and require urgent surgery,” Connolly said. “We hope to study that patient population in the future.”

The study is not a randomized controlled trial and it does not include any patients who were not given andexanet (controls). Although a randomized controlled trial offers potentially stronger evidence than a single-arm study design, this method was deemed to be impractical because the drug is intended to be used during crisis situations, demanding a speed of response that could be difficult to achieve with randomization protocols.

Find links to all the ACC 2018 late-breakling trials and video.