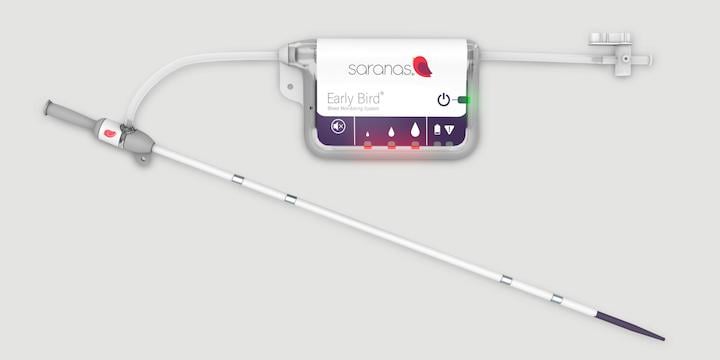 “We are excited to be the first program worldwide to incorporate the use of the Early Bird into our endovascular cases,” Kipperman said. “The Early Bird device was easily integrated into our standard workflow and provides meaningful information to secure and optimize patient outcomes.”

The Early Bird addresses a large and growing unmet need. One in five patients experience a bleeding complication during large-bore endovascular procedures, such as TAVR, endovascular aneurysm repair (EVAR) and percutaneous hemodynamic support. Further, a 2017 report in the Journal of the American Medical Association (JAMA) reported a three times increase in mortality, two times increase in length of stay and 60 percent increase in healthcare costs due to these type bleeding complications.[1]

The Early Bird Bleed Monitoring System includes a bleed detection array with integrated electrodes in a fully functional vascular access sheath. The device is designed to measure changes in bioimpedance to detect and monitor bleeding from vessel injury during endovascular procedures where the femoral artery or vein is used to obtain vascular access. Visual and audible indicators on the Early Bird notify the clinician of the onset and progression of bleeding events.

“The Early Bird is a transformative technology that provides physicians with the ability, for the first time, to effectively monitor the bleed status of the patient during and post endovascular procedures, receive timely notifications of actual bleeds and potentially reduce the severity of bleeding complications,” explained Philippe Généreux, M.D., chief medical officer at Saranas. “Compared to the current paradigm of waiting for symptoms, which could take hours to develop, the Early Bird allows physicians to detect bleeding in real-time and take the necessary actions quickly to protect the outcomes of the procedure and aid recovery for the patient.”

Watch an interview with Généreux in the VIDEO: How to Achieve Hemostasis With Large Bore Device Access.

Saranas was granted de novo classification by the U.S. Food and Drug Administration (FDA) for the Early Bird in March 2019. The company presented first-in-human results in May 2019 at the Society for Cardiovascular Angiography Interventions (SCAI), demonstrating that the Early Bird Bleed Monitoring System is safe, easily incorporated into standard workflows and able to detect bleeding before progression to a more severe or symptomatic phase. Read more about the SCAI presentation.