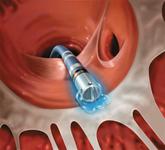 July 16, 2010 – Biosense Webster Inc. recently announced that more than 10 patients have now been enrolled in the CLARITY-study, comparing the efficacy, safety and efficiency of the Carto 3 system-guided radiofrequency ablation using the Navistar ThermoCool catheter versus the fluoroscopy-guided radiofrequency ablation using the pulmonary vein ablation catheter (PVAC) in patients with paroxysmal atrial fibrillation.

This prospective, randomized, two-arm clinical study will enroll up to 350 patients at up to 15 sites throughout Europe. Patients in this controlled study will be followed for one year after ablation. Interim results from the study will be disclosed after completion of the enrollment phase and the final results will be available at the end of the one-year follow-up period.

“The CLARITY-AF trial is the first multi-center randomized trial comparing atrial fibrillation ablation devices,” said Professor Mattias Duytschaever from AZ St Jan Hospital in Bruges, Belgium, and principal investigator of the CLARITY-AF study. “Primary endpoints are freedom from any atrial fibrillation, atrial tachycardia, pulmonary vein stenosis and procedure time. Given the growing epidemic of atrial fibrillation, the results of this trial will guide optimal treatment in a large patient population.”

Atrial fibrillation is the most prevalent heart rhythm disorder, increasing in prevalence with age. Clinical data suggests that 20 percent of all strokes result from the illness, which often remains undiagnosed and which can increase the risk of a stroke fivefold.

Carto 3 is the third generation of the Carto electro-anatomical mapping system. The system has been designed based on the feedback from several opinion leaders in the atrial fibrillation treatment arena. Carto 3 is built on the core magnetic based Carto proprietary technology, with a special focus on increased performance, ease of use and electrophysiology lab efficiency.