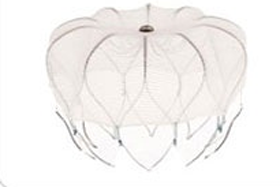 May 23, 2011 -- Boston Scientific Corporation announced results from a clinical study evaluating the use of its Watchman Left Atrial Appendage Closure Device in patients with atrial fibrillation who have a contraindication to oral anticoagulants such as warfarin. Data were presented at the annual EuroPCR Scientific Program in Paris by Martin Bergmann, M.D., Department of Cardiology at the Asklepios Klinik St. Georg in Hamburg, Germany, and principal investigator of the study.

Atrial fibrillation (AF) is a disorder that affects the ability of the heart to beat regularly and pump blood efficiently. Patients with atrial fibrillation are at a greater risk for stroke due to the formation and dislodgment of clots in the left atrial appendage (LAA) of the heart. Anticoagulants such as warfarin have traditionally been the only therapy for reducing stroke risk in these patients. The Watchman device is designed to exclude the left atrial appendage from the circulation, which is the source of most of the clots that cause stroke. For patients experiencing atrial fibrillation who are at high risk for stroke, the device offers an alternative to anticoagulant drugs, which are associated with an increased risk of bleeding.

"Patients with atrial fibrillation who cannot take oral anticoagulants have limited options to reduce their stroke risk," Bergmann said. "Early study results are promising of the Watchman device as an alternative for stroke prevention in this high-risk patient population with patients using dual anti-platelet therapy in place of warfarin after LAA closure."

In the study, 24 patients with contraindications to warfarin were successfully implanted with the Watchman device at a single center in Germany. Following the procedure, they received dual anti-platelet therapy for at least three months. Results showed that after a mean follow-up of 4.2 months, no cerebrovascular events or device dislodgements occurred. In a single case, a thrombus was observed and resolved after two weeks of treatment with heparin.

These results are consistent with clinical data from the multi-center ASA Plavix (ASAP) Registry recently presented at the 2011 American College of Cardiology by Vivek Reddy, M.D., of Mount Sinai Medical Center in New York. This study evaluated 113 patients with contraindications to warfarin implanted with the Watchman device and treated with dual anti-platelet therapy for six months post-procedure.

The CE marked Watchman device was commercialized outside the United States in 2009. In the United States, it is an investigational device, limited by applicable law to investigational use and not available for sale. The device was developed by Atritech, which was acquired by Boston Scientific in March, for left atrial appendage closure in patients with atrial fibrillation.