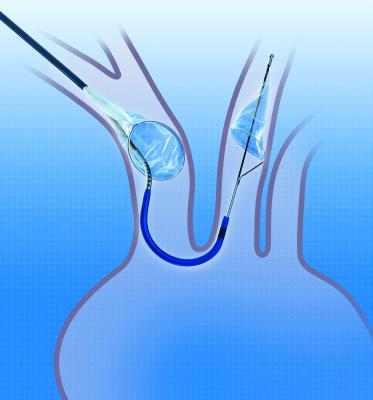 The American Association of Neurological Surgeons (AANS) and the Society of NeuroInterventional Surgery (SNIS) endorsed the need for the technology at the panel meeting. The groups were represented at the public hearing by Adnan Siddiqui, M.D., Ph.D., professor of neurological surgery at the University of Buffalo and chief medical officer at the Jacobs Institute. “The Sentinel device has shown its potential, across multiple trials, to filter and remove brain-borne debris safely, with very few vascular complications,” he explained.

The Sentinel CPS is the only device designed to protect the brain by capturing and removing debris dislodged during TAVR that would otherwise enter the cerebral circulation and increase the potential for stroke. A formal vote was not taken as the Sentinel CPS is a medium risk accessory device reviewed as a de novo application.

“The Sentinel device has shown its potential, across multiple trials, to filter and remove brain-borne debris safely, with very few vascular complications,” said Martin Leon, M.D., of Columbia University Medical Center/New York-Presbyterian Hospital, and chairman of the SENTINEL Clinical Steering Committee. “When we see the size and heterogeneity of the material captured, it is reassuring for me as a practicing TAVR implanter to know that it can be removed from the patient’s vasculature before it reaches the brain.“

In the trial, device delivery and retrieval were accomplished safely and successfully in 99.6 percent of cases. The Sentinel access site complication rate was only 0.4 percent. The device captured and removed embolic debris in 99 percent of patients in the study, with one in four patients having more than 25 pieces of debris with a size greater than, or equal to, 0.5 millimeters captured in the filters.

“We were extremely pleased with the near unanimous recommendation of the committee based on consideration of the totality of the clinical evidence that we have generated over the past six years. This strong support was based on the excellent safety profile and ability of the Sentinel CPS to reduce cerebral insults,” said Claret Medical President and Chief Executive Officer Azin Parhizgar, Ph.D. “The panel provided valuable feedback that will help define future study success criteria in the field of cerebral protection. We look forward to working collaboratively and diligently with the U.S. FDA in the coming weeks to ensure that we can bring the Sentinel technology to American physicians and their patients.”

The Sentinel CPS is the most-studied device in the field of TAVR cerebral protection, having been systematically evaluated in three randomized controlled trials involving more than 600 patients. More than 3,250 patients worldwide have been protected with the device to-date.

Watch the VIDEO “Defining the Need for TAVR Embolic Protection.”

Read the about the late-breaker trial at TCT 2016, “TAVR Embolic Protection Did Not Reduce Emboli Brain Lesions.”