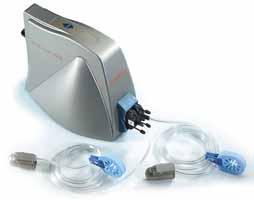 March 27, 2009 - Based on study results, researchers at Mayo Clinic say that a simple, noninvasive finger sensor test is "highly predictive" of a major cardiac event, such as a heart attack or stroke, for people who are considered at low or moderate risk.

The study will be presented Tuesday, March 31, 2009 at 11:30 a.m. EDT at the American College of Cardiology Annual Scientific Session in Orlando, FL.

The EndoPAT by Itamar Medical, measures the health of endothelial cells by measuring blood flow. Endothelial cells line the blood vessels and regulate normal blood flow. Research has shown that endothelial dysfunction can lead to atherosclerosis. Previously, there was no simple test for endothelium function, says Amir Lerman, M.D., a cardiologist at Mayo Clinic and senior author of the study.

Forty-nine percent of patients whose EndoPAT test indicated poor endothelial function had a cardiac event during the seven-year study. Researchers at Mayo Clinic and Tufts-New England Medical Center in Boston used the device to test 270 patients between the ages of 42 and 66 and followed their progress from August 1999 to August 2007. These patients already knew that they had low-to-medium risk of experiencing a major heart event, based on their Framingham Risk Score, and had risk factors such as high blood pressure, high cholesterol, obesity or a family history of heart disease.

"The results of the study may help identify a discriminating tool beyond the Framingham Risk Score," Dr. Lerman said. "And the results of these individual tests may help physicians change a patient's medications or recommend other therapies, so they don't have a heart attack or stroke later on."

The test may be used in an individualized medicine model of risk assessment of the patients, Dr. Lerman says.

During an EndoPAT test, which takes 15 minutes, probes are placed on each index finger and hooked up to a small machine to measure blood flow. A standard blood pressure cuff is placed on one arm; the arm without the cuff is the control. A reading of the fingers' blood flow rate begins, and then the blood pressure cuff on one arm is inflated for a few minutes and then deflated, allowing for three timed readings.

The role of the inflated blood pressure cuff is to occlude and then release blood flow to assess reactive hyperemia (RH), the normal blood flow response that occurs when occlusion is released. In the study, 49 percent of the patients who went on to have a cardiac event had a low RH score.

A low RH signal, which indicates a lower blood flow response, is consistent with endothelial dysfunction and potentially impaired vascular health that may lead to or serve as a marker for future events, Dr. Lerman says.

Dr. Lerman serves on an advisory board for Itamar Medical, EndoPAT's manufacturer, and, since completion of the study, has received consulting fees of less than the federal threshold for significant financial interest. During the course of the actual study, he received no consulting personal fees.