Study shows risks are both short- and long-term 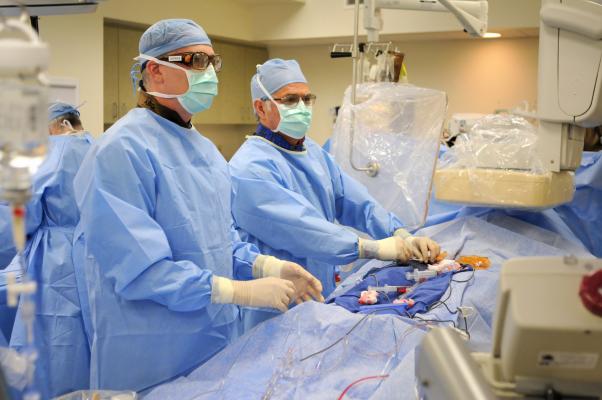 November 9, 2016 — Patients who undergo minimally invasive heart valve replacement, known as transcatheter aortic valve replacement (TAVR), sometimes develop heart rhythm problems that necessitate placement of a permanent pacemaker. However, when a pacemaker is needed soon after TAVR, patients often have worse outcomes than those who did not need a pacemaker, according to a study published recently in JACC: Cardiovascular Interventions. The study shows that the risks are both short- and long-term and include lengthier hospital and intensive care unit stays as well as a greater risk of death.

“While pacemakers can and do help save lives, what our study shows is that when they are placed within a month post-TAVR, they may be associated with worsened outcomes as compared to those who did not need pacemakers,” said the study’s lead researcher, Opeyemi Fadahunsi, MBBS, MPH, a cardiology fellow at Dalhousie University in Halifax, Nova Scotia. At the time the study was conducted, Fadahunsi served at Reading Health System in West Reading, Pa.

TAVR is a relatively new, minimally invasive surgical procedure that repairs the aortic heart valve without needing to remove the old valve. Often a patient spends less time recovering and avoids some of the risks associated with open-heart valve replacement. It is typically recommended for patients who are not able to undergo a traditional open-heart procedure — many times, these are people in their 80s or 90s who have other medical conditions that make an open-heart surgery a less preferred option.

Using data from the STS/ACC TVT Registry, researchers analyzed patients undergoing TAVR in the United States at 229 sites between November 2011 and September 2014 to see how permanent pacemaker implantation after having TAVR affected them.

Of the 9,785 study participants, 651 needed a permanent pacemaker within 30 days of the TAVR procedure. Those who needed a permanent pacemaker had a slightly longer hospital stay as well as longer reported hours in the intensive care unit. They also had an increased risk of death from any cause at one year. In addition, they found that the combination of death from any cause or heart failure hospitalizations was increased at one year.

“While TAVR is a great advance in medical care, cardiologists need to better understand both how to prevent patients from developing heart rhythm problems and why patients who need pacemakers in the setting of recent TAVR have worsened outcomes,” Fadahunsi said. “We found in our study that the need for a pacemaker was more common in certain valve types and larger-sized valves, in those undergoing the procedure at an older age, and those who were sicker.”

In an accompanying editorial, Marina Urena, M.D., Ph.D., and Josep Rodés-Cabau, M.D., said the findings provide new insight into the conundrum of conduction abnormalities in TAVR. If confirmed, these results urge engineers, device manufacturers and physicians to work even harder to find ways to reduce the rate of permanent pacemaker placement after TAVR.