Heart Failure After Heart Attack May Cause Cancer 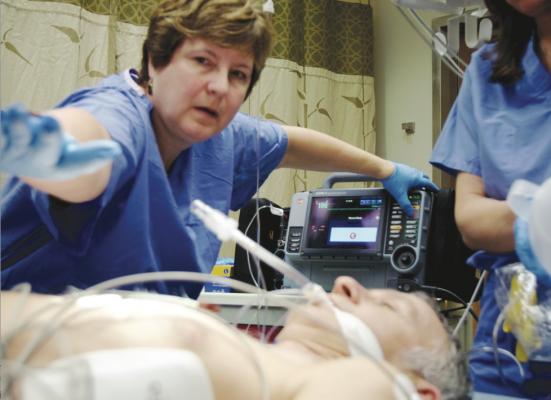 July 21, 2016 — People who develop heart failure after their first heart attack have a greater risk of developing cancer when compared to first-time heart attack survivors without heart failure, according to a recent study in the Journal of the American College of Cardiology.

Heart failure refers to a number of conditions that can affect the heart’s structure and the way the heart works and, over time, make it harder for the heart to pump enough blood and oxygen to meet the body’s needs. It is associated with a higher risk of death than other types of heart disease.

Death from heart failure can often be attributed to direct cardiac causes such as heart failure symptoms, inadequate blood supply and irregular heartbeats; however, the noncardiac causes of heart failure death, such as cancer, are becoming increasingly recognized as researchers learn more about their association with the disease.

While cancer is usually considered a separate cause of death from heart disease, studies have been conducted to determine an association between heart disease and an increased cancer risk. This group of researchers previously looked at increased risk of cancer among heart failure patients and showed a 70 percent increase in risk.

In this new study, they looked at cancer risk in patients who developed heart failure after their first heart attack. Researchers chose to compare those with and without heart failure after heart attack because these patient groups have a lot in common, including atherosclerosis, risk factors, treatments received and follow-up routines. The factors that may differ between the groups, such as older age, obesity, smoking and diabetes, are known and can be controlled for, providing for comparison groups that may provide more information on the impact of heart failure on subsequent cancer occurrence than other heart disease groups.

Researchers looked at records for 1,081 patients in Olmsted County, Minn., who had their first heart attack between November 2002 and December 2010. Patient data was from the Rochester Epidemiological Project.

After an average of 4.9 years of follow-up, 228 patients, or 21 percent, were diagnosed with heart failure and 28 of those patients, or 12.3 percent, developed cancer. In comparison, 8.2 percent of patients without heart failure were diagnosed with cancer. The average time from first heart attack to cancer diagnosis was 2.8 years, with the most common cancers being respiratory, digestive and hematologic.

The analysis showed that the incidence of cancer was similar initially between those with and without heart failure, but after 1.5 years of follow-up there were higher rates of cancer among patients with heart failure. An association between heart failure and cancer remained after adjusting for age, sex, comorbidities, smoking, BMI and diabetes.

The findings are statistically significant, but a limitation of the study is the small sample size and number of events. These findings also support the earlier study that showed a 70 percent increased risk of cancer among heart failure patients.

The influence of medication on cancer diagnosis was also studied. Patients who developed heart failure after heart attack were prescribed the same medications at discharge as those who were not, so researchers concluded treatment for heart attack was not likely responsible for the higher rate of cancer in heart failure patients.

“Cancer constitutes an enormous burden to society, and both cancer and heart failure are well-known causes of increased mortality,” said Veronique Roger, M.D., senior author of the study and director of the Mayo Clinic Robert D. and Patricia E. Kern Center for the Science of Health Care Delivery in Rochester, Minn. “Our research suggests an association between both diseases, and it’s possible that as we learn more about how this connection works, we can prevent deaths. In the meantime, physicians should recognize this increased cancer risk for heart failure patients and follow guideline-recommended surveillance and early detection practices.”

In a related editorial comment, Paolo Boffetta, M.D., M.P.H., associate director for population sciences at The Tisch Cancer Institute and chief of the Division of Cancer Prevention and Control of the at Mount Sinai in New York, addressed whether the increased risk of cancer in this group of heart failure patients warranted additional screening beyond what was recommended for the general public. The two most prominent cancers were digestive and respiratory, for which routing screening tests are not available.

Boffetta also said the predominance of these two cancers suggests “a role of shared risk factors, as both heart failure and cancer are associated with smoking and alcohol.”

This study was supported by grants from the National Heart, Lung and Blood Institute and the National Institute on Aging. The authors of the study and the editorial comment have no disclosures to report.