High Intensity Exercise in Teenagers Could Ward Off Heart Disease 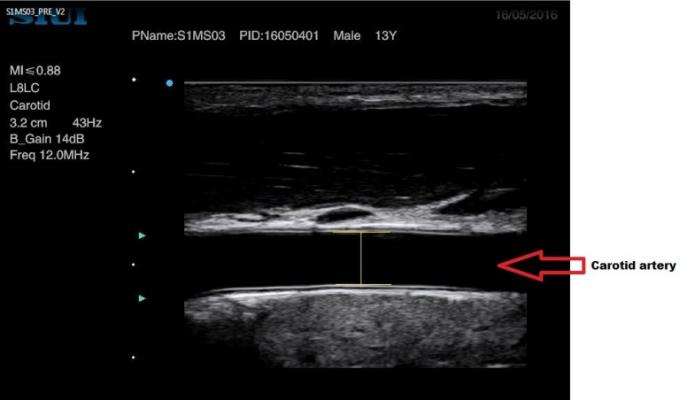 Ultrasound image of the carotid artery. Lines in yellow were used to determine arterial diameter and stretching before and following exercise.

July 16, 2018 — New research published in Experimental Physiology has indicated potential differences in heart health benefits of exercise intensity in teenagers. Teenage years are an important stage of life, with research suggesting it is a time during which heart diseases start to develop. These findings indicate that teenagers who participate in high intensity exercise have lower blood pressure. This may lead to a lower risk of developing heart disease later in life, but this requires confirmation with further research.

Blood pressure was monitored every heart beat before and up to one hour after the exercise. The measurements also involved ultrasound images of the carotid artery, the main blood vessels that supply the head and neck, to determine the ‘stretch’ of the artery and how this impacts the control of blood pressure following exercise.

In the hours following exercise, blood pressure decreases below resting values. This is known as post-exercise hypotension. These results suggest that in teenagers, eight bouts of one-minute’s worth of running at a vigorous intensity (i.e. running close to the maximum heart rate) caused post-exercise hypotension lasting up to one hour. The same effect was not observed following running at moderate intensity (i.e. jogging), where blood pressure was restored just twenty minutes after exercise. The stretch of the carotid artery (which supplies the brain with oxygenated blood) and the brain control of the heartbeat, which are known to monitor and adjust blood pressure, were similar between the two exercise intensities at one-hour after the exercise. These findings indicate that exercise intensity alters other mechanisms of adjustments in blood pressure differently, one-hour following the completion of the exercise in healthy teenagers. This study is thus the first to show that post-exercise hypotension is dependent on exercise intensity in healthy 12-15 year olds.

The fall in blood pressure of healthy teenagers may have a long-term clinical importance if translated to those with high blood pressure, as previously reported in adults. Similarly, the blood pressure reducing effects of the exercise could lead to better blood pressure control, particularly when young people face stressful situations.

Although these data are novel, the ethical implications of working with teenagers meant that all measurements were taken non-invasively, which may have reduced accuracy in comparison to more invasive drug-infusion methods. Also, the research involved only boys, which does not allow extrapolation of the findings to girls. Furthermore, the observed reduction in blood pressure was only measured up to one hour after a single bout of exercise. However, the authors aim to expand these initial findings to children, teenagers with hypertension and other conditions that increase the risk of heart disease, such as obesity and low levels of fitness. Similarly, the research team also wish to investigate whether the decrease in blood pressure results in lowered vessel reactivity to stressful situations. Finally, the effects of exercise training on the control of blood pressure following exercise in teenagers remain to be seen.

Ricardo Oliveira, a Brazilian Ph.D. student funded through the Science without Borders Ph.D. scheme who led the research, enjoyed testing (and educating) the participants: “The best part of the research was the involvement and dedication of the participants, who we always find are better research participants than adults! All were disappointed that the project came to an end and they reported to have enjoyed visiting the university facilities, participating in a scientific study and learning new information about their heart, blood vessels and how the cardiovascular system responds to exercise,” he said.