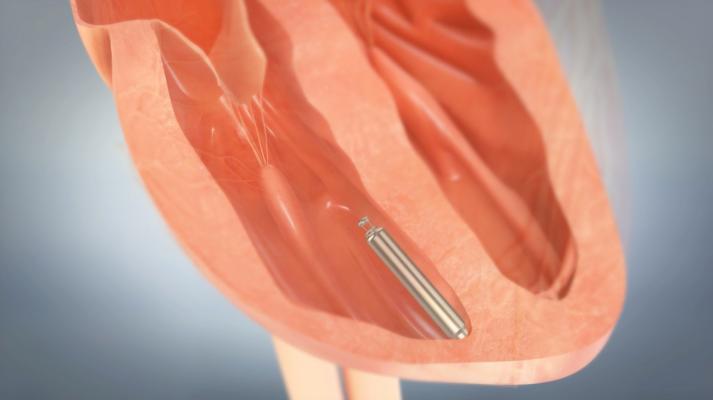 July 8, 2014 — A Huntington Memorial Hospital patient has become the first patient in the San Gabriel Valley in southern California to be implanted with a tiny, leadless cardiac pacemaker. Developed for patients with bradycardia, St. Jude Medical’s Nanostim device is designed to be placed directly in a patient’s heart without the visible lump, scar and insulated wires (leads) required for conventional pacemakers.

The implant took place as part of the LEADLESS II pivotal trial, a prospective, non-randomized, multicenter, international clinical study designed to evaluate the safety and effectiveness of the Nanostim leadless pacemaker in patients indicated for the device in the United States. The study is expected to enroll approximately 670 patients at 50 centers. The procedure was successfully performed by cardiologists David Mok, M.D., and Mayer Rashtian, M.D., FACC, FHRS, director of electrophysiology.

“The procedure is less invasive than traditional pacemaker surgery, which reduces the risk of infection or other complications,” said Mok. “Huntington is committed to continuous quality improvement and being on the forefront of new treatments and technologies. We are exceptionally pleased to be part of this worldwide trial and among the first to perform the implant."

Implanted via the femoral vein with a steerable catheter, the Nanostim pacemaker offers physicians a less-invasive approach compared to traditional pacemaker procedures that require more extensive surgery. The miniaturized device is designed to be fully retrievable so that it can be readily repositioned during the implant procedure and later retrieved if necessary.

It is less than 10 percent the size of a conventional pacemaker and is the least invasive pacing technology available today. The small size of the device and lack of a surgical pocket, coupled with the exclusion of a lead, improves patient comfort and can reduce complications, including device pocket-related infection and lead failure. The elimination of the visible lump and scar at a conventional pacemaker’s implant site, in addition to the removal of patient activity restrictions that are routinely put in place in an attempt to prevent dislodgement or damage to a conventional lead, will potentially improve the quality of life for patients with this technology by allowing most to continue living active, uninhibited lifestyles. The device is supported by the St. Jude Medical Merlin programmer, which is also used to interrogate and program the company’s other pacemakers and implantable cardioverter defibrillators (ICDs).

The Nanostim leadless pacemaker received CE mark approval in 2013 and is now available in select European markets. The device is not available for sale in the United States