IDI working with ECLS Inc. to create radiation shield that will reduce radiation dose during interventional procedures without causing orthopedic injury with prolonged use 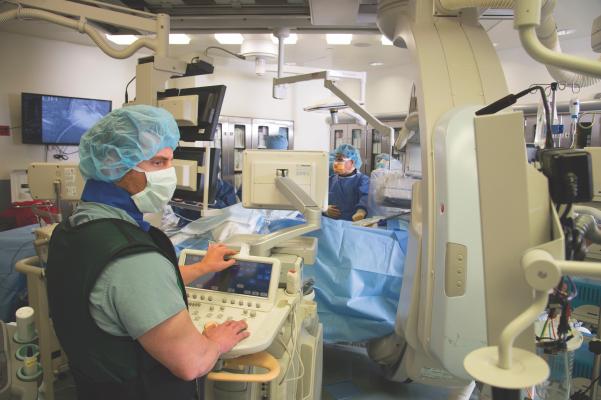 October 3, 2018 — Image Diagnostics has entered into a product development agreement with ECLS Inc. to design a new radiation shield expected to debut at the 2018 Radiological Society of North America (RSNA) 2018 annual meeting, Nov. 26-30 in Chicago. The radiation shield, conceptualized by ECLS founder James Goldstein, M.D., cardiologist at Royal Oak Michigan’s Beaumont Hospital, is expected to address the adverse health effects of radiation exposure and the strain of long-term wear of protective lead during interventional surgery.

Small measures have been taken in recent years to safeguard interventional staff from radiation exposure, including enhanced training, frame rate reduction, techniques for positioning and various shielding systems. Despite these efforts, interventionalists are still exposed to radiation daily while wearing personal protective lead, which only partially protects them. This, according to many epidemiologic studies, leads to orthopedic injuries (especially the spine) the induction of cataracts and may be associated with greater risk for cancers. In aggregate, these ailments contribute to missed days of work and/or unwanted early retirement from the field [1].

Major health repercussions posed to interventionalists today due to cumulative adverse effects of bearing weight of personal protective lead and radiation exposure include:

Sixty percent of cardiologists have reported spinal issues after just 21 years in practice, 28 percent report knee, hip or ankle problems and 33 percent miss work due to orthopedic issues caused by cumbersome protective apparel and poor ergonomic design of interventional suites [1]. In a Society for Cardiovascular Angiography and Interventions (SCAI) survey, nearly half of the 424 respondents reported spine problems [2]. The daily bearing of weight over time largely places interventionalists at risk for spinal, knee, hip and ankle pain and illness, with a strong correlation being found between the number of years in practice and the incidence of these impairing orthopedic problems [2].

Those in the interventional field face a high risk of cataractogenesis. In an observational study, posterior subcapsular lens opacities are shown to be three times more prevalent in interventional cardiologists than the general population [4].  While measures such as the use of protective eyewear aid in the safeguarding of those exposed to radiation, they have a variable effectiveness depending on the shape and thickness of the glasses as well as the radiation angle and anatomical facial structure of the physician [8,9].

Observational evidence in several studies suggests a possible correlation between radiation exposure during fluoroscopically guided procedures and the induction of hematologic malignancies and cancers in the brain and neck [5,6]. Reports of brain cancers in interventionists have shown that these tumors predominantly occur on the left side of the brain — that side which is directly more exposed to radiation from the X-ray C-arm compared to the right — suggesting a possible causal relationship between radiation and such frequently fatal cancers [5,6,7]. One study [7] found that the death rate from brain cancer in radiologists was almost three times that of other medical specialists who did not use radiation.