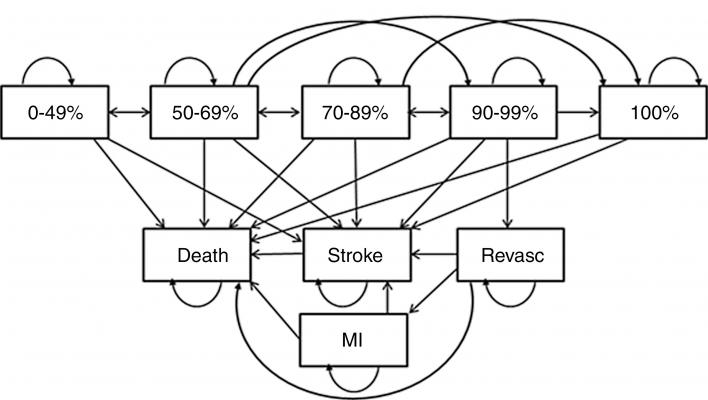 Tornado diagram summarizes one-way sensitivity analyses for the CVR strategy compared with the medical therapy strategy for the base-case analysis. Most ICERs were close to the base-case result because model parameters were varied through plausible ranges, with the exceptions of the cost of revascularization and the cost of chronic stroke care. Parameters are shown in descending order of influence on model results. RR = risk ratio. 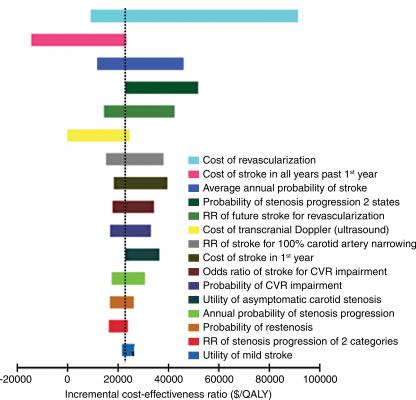 Graph of two-way sensitivity analysis shows optimal strategy for different combinations of baseline stroke risk and probability of complications during revascularization. CVR strategy is optimal in the blue region, which includes base-case result (marked by an x) other strategies could be optimal given other combinations of stroke risk and revascularization complication risks. 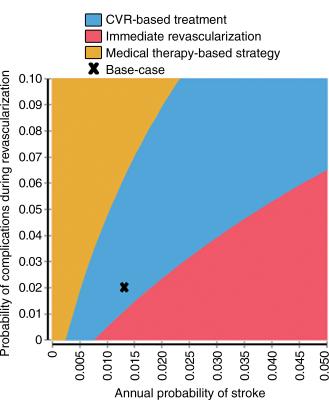 Graph of two-way sensitivity analysis shows optimal strategy for different combinations of baseline stroke risk and probability of complications during revascularization. CVR strategy is optimal in the blue region, which includes base-case result (marked by an x) other strategies could be optimal given other combinations of stroke risk and revascularization complication risks.

October 15, 2014 — Imaging can be a cost-effective way to identify people at risk for stroke who might benefit from aggressive intervention, according to a new modeling study published online in the journal Radiology.

The study looked at people with asymptomatic carotid artery stenosis, a narrowing of the major blood vessels supplying blood to the head due to atherosclerosis, or plaque buildup. Carotid artery stenosis is the primary cause of up to 20 percent of ischemic strokes, which result from an obstruction within a blood vessel and make up 85 percent of all strokes. Stroke victims often undergo revascularization procedures like carotid endarterectomy, or surgical removal of the plaque, to restore blood flow, but use of the procedures in asymptomatic patients is more controversial, according to Ankur Pandya, Ph.D., assistant professor of healthcare policy and research and public health in radiology at Weill Cornell Medical College in New York City.

"There are complications and costs associated with these revascularization procedures, and they are often done without knowing if the risks and costs are worth the benefits," Pandya said.

Pandya and colleagues recently assessed the impact of cerebrovascular reserve (CVR) testing, a measure of blood flow reserve to the brain, on asymptomatic people with significant carotid artery stenosis. While different imaging modalities can be used in CVR testing, the researchers used transcranial Doppler (TCD) sonography, an inexpensive, widely available option that does not expose patients to ionizing radiation. They constructed a mathematical model that allowed them to make hypothetical comparisons among three different approaches: CVR testing, immediate revascularization with carotid endarterectomy and medical therapy-based management with subsequent revascularization only for patients whose stenosis got worse.

The CVR-based approach, which led to about half of the patients receiving revascularization, appeared to have the most favorable balance of benefits and costs. The medical therapy-based strategy was associated with the lowest lifetime costs and the fewest revascularizations; however, it also resulted in the lowest life expectancy and lifetime quality-adjusted years, which account for both the length and quality of life experienced by patients. The immediate revascularization strategy had the highest costs, by a wide margin, and only incremental health benefits compared with the CVR-based approach.

"The study results show that imaging can be a cost-effective tool to stratify patients by risk of stroke and help sort patients into invasive, expensive interventions and less invasive options," Pandya said.

He said that CVR testing also has the potential to help characterize whether carotid artery plaque is causing abnormal brain blood flow patterns, which may therefore identify the patients who are at greatest risk of stroke.

"CVR testing with ultrasound could be used to stratify patients by risk based on abnormal blood flow patterns to the brain, and then other imaging tests like MRI [magnetic resonance imaging] could be employed to look at the composition and stability of plaque, which may give greater insight into those plaques most likely to rupture and cause symptoms" Pandya said.

Cost effectiveness models like the one used in the study have gained prominence is recent years and are already used by healthcare payers in Europe, Canada and Australia. Pandya expects these models to become more prominent in the United States as healthcare reform evolves. "Our model takes all these pieces of information on risks, costs and benefits and does the math in a systematic way to help clinicians make decisions," he said.

An estimated 400,000 patients over the age of 70 years in the United States have asymptomatic carotid artery stenosis, putting them at a higher risk of stroke.