iPhone 12 May Cause Implantable Cardioverter Defibrillators to Malfunction 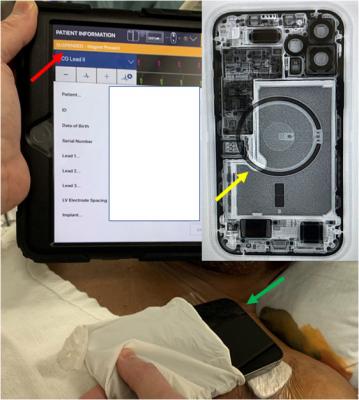 January 8, 2020 — A new study published this week in HeartRhythm, the journal of the Heart Rhythm Society (HRS), found evidence that Apple's new iPhone 12 might cause implantable cardioverter defibrillators (ICDs) to become inoperable if placed are near the implanted device.[1] This small study was undertaken at Henry Ford Hospital in Detroit because the new magnet array used by the popular mobile device is different from previous generations of cell phones and may pose issues if it is near a patients ICD.

Lead author Joshua C. Greenberg, M.D., section of cardiac electrophysiology, Henry Ford Heart and Vascular Institute, raised the concerns for possible device-device interaction due to presence of a strong magnetic array in the iPhone and MagSafe compatible cases. This study tested for interaction on a patient with a Medtronic ICD. Researchers found once the iPhone was brought close to the ICD over the left chest area, there was an immediate suspension of ICD therapies, which persisted for the duration of the test. This was reproduced multiple times with different positions of the phone over the ICD pocket.

An ICD system contains a battery, capacitors, sensing/ pacing circuit together with an intra-or extra-cardiac lead. All ICD’s have a in-built switch (Reed switch, Hall-effect sensors, Giant magneto sensitive resistors or coils) which responds to an externally applied magnetic field. When an external magnet is applied to a defibrillator, high voltage shock therapy for ventricular tachycardia and ventricular fibrillation is suspended. It has been estimated that a magnetic field stronger than 10 Gauss is strong enough to activate these switches.

Recently, Apple Inc. launched the new iPhone 12 series, which has a circular array of magnets around a central charging coil for the phone to be compatible with MagSafe accessories. MagSafe technology contains a magnetometer and single coil near field communications (NFC) reader. The magnets aids in properly aligning the iPhone on a wireless charger and other peripheral accessories and increases wireless charging speeds.

The Apple website does mention magnetic interference with medical devices and prior consulting with physician and medical device manufacturers.

The researchers said medical device manufacturers and implanting physicians should remain vigilant in making patients aware of this significant interaction of the iPhone 12 and other smart wearables with their cardiac implantable electronic devices.