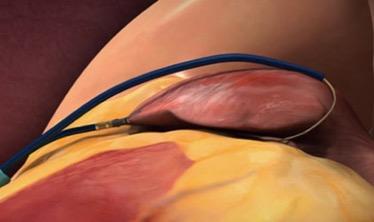 May 15, 2021 — Patients with an elevated risk of stroke due to heart rhythm problems, or atrial fibrillation (AFib), were much less likely to suffer a stroke after undergoing heart surgery if doctors concurrently performed an additional left atrial appendage occlusion (LAAO) procedure, according to the results of the LAAOS III late-breaking trial presented at the American College of Cardiology (ACC) 2021 virtual scientific session.

This study was simultaneously published online in the New England Journal of Medicine at the time of presentation.[1]

AFib increases a person’s risk of stroke or systemic embolism, which are life-threatening conditions caused by blood clots blocking an artery. It has been hypothesized that the blood clots that cause these conditions often originate in the left atrial appendage, a small sac on the upper left chamber of the heart. LAAO is a procedure to seal off this small sac, thus reducing the risk that a dangerous clot will form.

In this trial, LAAO lowered the risk of stroke or systemic embolism, the primary endpoint, by 33% overall in patients with AFib or atrial flutter. After the first 30 days following the procedure, patients who received LAAO were 42% less likely to suffer a stroke over long-term follow-up than those who did not receive LAAO. The trial was stopped early due to the strength of the observed benefits from the procedure.

“This study confirms a new paradigm for stroke prevention for patients with atrial fibrillation,” said Richard Whitlock, M.D., Ph.D., a cardiac surgeon at McMaster University in Ontario, Canada, and the study’s lead author. “The additive benefit of surgical LAAO on top of blood thinners has now been proven. There is no question that patients who are undergoing heart surgery and have elevated stroke risk and atrial fibrillation should have their atrial appendage occluded in their cardiac surgery.”

Researchers in the LAAOS III trial enrolled 4,811 patients undergoing heart surgery at 105 centers in 27 countries. About two-thirds of the trial participants underwent valve surgery and 20% underwent coronary artery bypass graft surgery. All the patients had documented AFib or atrial flutter and a CHA₂DS₂-VASc score of two or higher, indicating an elevated risk of stroke. Half of the participants were randomly assigned to receive LAAO at the time of their heart surgery. All patients received standard anticoagulant medications to reduce the risk of harmful clots after surgery.

After a median follow-up of 3.8 years, 4.8% of patients who received LAAO and 7% of patients who did not receive LAAO had suffered a stroke, a difference that was highly significant in favor of LAAO. The difference was even more pronounced after the first 30 days following surgery. Strokes occurring soon after surgery typically have causes beyond AFib, such as calcium from blood vessels; thus, the true impact of LAAO on the risk of stroke from AFib is best seen after that early period, Whitlock said.

The results were consistent across all subgroups analyzed, with LAAO bringing the same benefits regardless of geographic location, sex, age, type of AFib, type of blood thinner used or other variables. On average, the procedure added less than 10 minutes to the heart surgery and demonstrated safety both in the short and long term.

“We were ecstatic to see these results,” Whitlock said. “This trial opens a new option for treatment of these patients by layering a mechanical approach — occlusion — on top of a medical approach. Instead of a tension between anticoagulation and occlusion, we need to start thinking about using these as additive approaches when patients are at high risk for stroke. This is a procedure that’s done once, and it keeps giving a benefit over time. This is going to prevent thousands of strokes.”
Since LAAO procedures in the study were performed through a standard surgical approach, it is unclear whether catheter-based approaches for LAAO would bring the same benefits.

The study’s main funding sources were the Canadian Institutes of Health Research and the Heart and Stroke Foundation of Ontario.