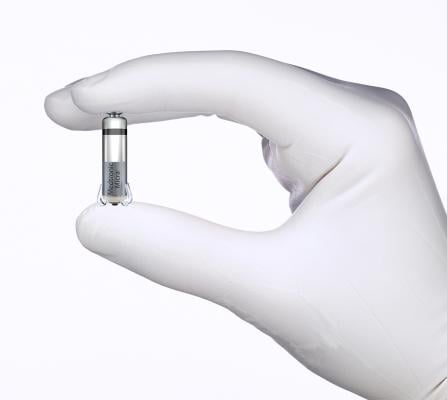 June 23, 2015 - Results from a clinical trial evaluating the Micra transcatheter pacing system (TPS), the world's smallest pacemaker, were presented at the Heart Rhythm Society's 36th annual scientific sessions in May. The device was shown to meet its initial safety and performance measures, as 100 percent of the first 140 patients who received it experienced a successful implant procedure. The study was conducted at the Minneapolis Heart Institute Foundation.

"These initial findings are encouraging and we are pleased to be among the participating clinical trial sites evaluating this novel pacemaker," said Charles C. Gornick, M.D., physician at Minneapolis Heart Institute at Abbott Northwestern Hospital. "This miniaturized transcatheter pacemaker - which is about the size of a large vitamin - may prove to be a simpler and less-invasive pacemaker option for many patients."

Patients evaluated in this study spanned a wide variety of profiles, including ages ranging from 21 to 94 years, weights ranging from 90 – 362 pounds and global residency including Asia-Pacific, Europe and the United States. The study also included high-risk patients with lung disease such as chronic obstructive pulmonary disease (COPD) and pulmonary hypertension. Of the 140 patients, who were followed for an average of two months, only two (1.4 percent) experienced events which resulted in prolonged hospitalization, which is in line with rates observed in studies of traditional pacemakers.

At less than one-tenth the size of traditional pacemakers, the Micra TPS is small enough to be delivered through a catheter, which is inserted in the upper leg, threaded to the heart and then implanted directly inside the heart.

U.S. trial enrollment began in February 2014 and ended in April 2015. The Minneapolis Heart Institute Foundation was the fifth-highest enrolling site in the U.S. with a total 17 enrollments between Abbott Northwestern Hospital, Mercy Hospital and United Hospital.

The Micra TPS does not require the use of leads to deliver pacing therapy; rather, it is attached to the heart via small tines and delivers electrical impulses that pace the heart through an electrode at the end of the device. Once positioned, the Micra TPS can be repositioned or retrieved, if needed. The device responds to patients' activity levels by automatically adjusting therapy. Unlike traditional pacemakers, the Micra TPS does not require a surgical "pocket" under the skin, so potential sources of complications are eliminated-as are any visible signs of the device.

In the United States, the Micra TPS is an investigational device and not yet approved for commercial use. The Medtronic Micra TPS Global Clinical Trial is ongoing and will continue to evaluate the safety and effectiveness of the device through a single-arm, multi-center study that has enrolled more than 700 patients at 56 centers in 19 countries.