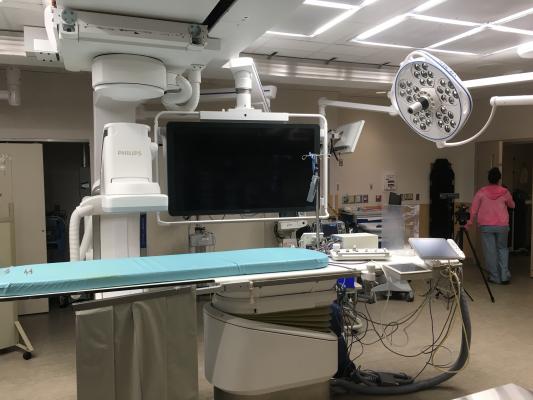 Ohio University alumnus and esteemed engineer Fritz Russ, BSEE ’42, HON ‘75, and his wife, Dolores Russ, established the biennial prize in 1999 with a multimillion dollar gift to Ohio University. They modeled it after the Nobel Prize, with the goal of recognizing bioengineering achievements worldwide that are in widespread use.

“This innovation — truly, sets of innovations — enables the treatment of coronary artery disease without the complexities, cost and risk of open heart surgery. Most of us have a friend or relative who has benefited greatly from angioplasty treatment,” said Russ College Dean Dennis Irwin. “These contributions have truly improved the human condition. Rewarding such innovations was the Russes’ intent.”

Percutaneous coronary intervention, also referred to as percutaneous transluminal coronary angioplasty (PTCA), is a minimally invasive procedure that uses a catheter to place a small structure called a stent to open up blood vessels in the heart that have been narrowed by plaque buildup. PCI improves blood flow, thus decreasing heart-related chest pain, making patients feel better and increasing their ability to be active. Ten of millions of patients have benefited from PCI worldwide, and this procedure has replaced or significantly delayed the need for open heart coronary bypass surgery.

Julio C. Palmaz, inventor of the first U.S. Food and Drug Administration (FDA)-approved balloon-expandable vascular stent (1990), is Ashbel Smith Professor at the University of Texas Health Science Center in San Antonio and scientific adviser of Vactronix Scientific. The Palmaz stent is on display at the Smithsonian’s National Museum of American History in Washington, D.C. In 1994 he and Richard Schatz created a modified coronary stent — two Palmaz stents joined by a single connector — approved by the FDA as the first stent indicated for the treatment of failure of coronary balloon angioplasty. The Palmaz-Schatz stent became the gold standard for every subsequent stent submitted for FDA approval.

Leonard Pinchuk is an inventor and entrepreneur in biomedical engineering, with 128 U.S. patents and 90 publications. He has co-founded 10 companies where his major accomplishments include invention of the Nylon 12 angioplasty balloon, helical wire stent, modular stent-graft, a drug-eluting stent (Taxus), several biomaterials (Bionate and polystyrene-block-isobutylene-block-styrene [SIBS]), a novel glaucoma tube (InnFocus MicroShunt), and the next-generation intraocular lens. He is a Distinguished Research Professor of Biomedical Engineering at the University of Miami.

John Simpson has helped revolutionize the field of cardiology through innovations that fundamentally altered how physicians treat cardiovascular disease. In 1981 he created a new catheter system for coronary angioplasty with an independently steerable guidewire in the central lumen of the balloon catheter, patented as the over-the-wire balloon angioplasty catheter. He now focuses his efforts on the treatment of vascular disease through the development of new technologies combined with a new approach to optical imaging.

Richard Schatz is research director of cardiovascular interventions at the Scripps Heart, Lung and Vascular Center, and director of gene and stem cell therapy. He is a recognized international expert in interventional cardiology and has published and lectured extensively. His seminal work in coronary stents spurred a revolution in the treatment of coronary artery disease — over 2 million of them are placed annually worldwide, with an immeasurable impact on relieving mortality and morbidity, improving patients’ lives, and reducing healthcare costs.

Paul Yock is the Martha Meier Weiland Professor of Medicine and founding co-chair of Stanford’s Department of Bioengineering, with courtesy appointments in the Graduate School of Business and the Department of Mechanical Engineering. He is also founder and director of the Stanford Byers Center for Biodesign. He has authored over 300 peer-reviewed publications, chapters, and editorials and two textbooks, and holds over 50 U.S. patents. Yock is internationally known for his work in inventing, developing and testing new devices, including the Rapid Exchange stenting and balloon angioplasty system, which is now the primary system in use worldwide. He also invented the fundamental approach to intravascular ultrasound imaging and founded Cardiovascular Imaging Systems (CVIS), later acquired by Boston Scientific.

“Ohio University is honored to join the National Academy of Engineering in recognizing these accomplished individuals, who have contributed to a bioengineering advancement that has enabled better health for heart patients across the world,” said Ohio University President M. Duane Nellis. “Their multi-disciplinary collaboration that lead to the development of PCI, a technology that has revolutionized coronary health, truly embraces the vision that Fritz and Dolores Russ had when creating the Russ Prize.”

Palmaz, Pinchuk, Schatz, Simpson and Yock are the 10th recipients of the Russ Prize. They will receive the award at a National Academy of Engineering gala ceremony in Washington, D.C., on Feb. 20.