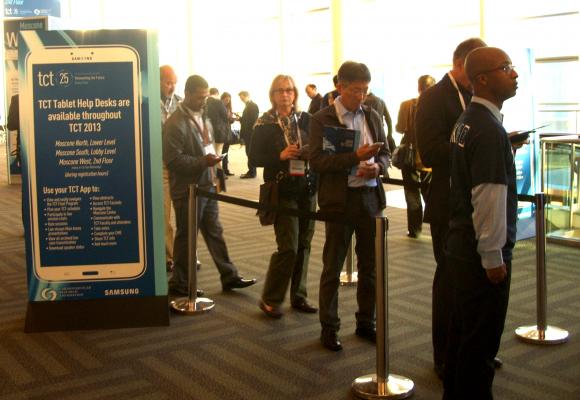 As part of this alliance, the two organizations will closely collaborate on creating educational content for physicians, surgeons and other healthcare professionals. The VEITHsymposium leadership will be actively involved in developing the endovascular program for TCT 2019, taking place Sept. 25-29 in San Francisco. The VEITHsymposium group will also plan dedicated critical limb ischemia and aortic sessions at TCT 2019. Similarly, CRF will actively participate in the development of a two-day hands-on training pavilion and other interventional sessions at this year’s VEITHsymposium, which will take place Nov. 19-23 in New York City.

“We are pleased to be partnering with such an esteemed educational conference as the VEITHsymposium,” said Juan F. Granada, M.D., president and CEO of CRF. “Over the last 45 years, they have had a remarkable influence on medical education and innovation in the field, which has had a tremendous impact on patient care.”

Watch the VIDEO: Cath Lab of the Future Cardiovascular Technologies to Watch, an interview with Granada at TCT 2017.

“This alliance between two leading continuing medical educational meetings has as its goal the provision of the best, most up-to-date information possible to all those specializing in the care of non-cardiac vascular disease patients,” said Frank J. Veith, chairman of VEITHsymposium.  “This unique alliance will lead to better, more appropriate care for the increasing number of vascular disease patients around the world, while recognizing the reality that many specialties are involved in providing this care.”

“Vascular disease is a leading cause of death and disability,” said Sahil A. Parikh, M.D., director, endovascular services at the Center for Interventional Vascular Therapy at New York-Presbyterian/ Columbia University Irving Medical Center and director of the endovascular program of TCT. “It’s critically important for physicians and other healthcare professionals to be educated and trained on the latest endovascular treatments. This alliance will help improve the survival and quality of life for patients with vascular disease by emphasizing multidisciplinary care of vascular patients.”

"Limitless opportunities for improved care of vascular patients is the primary goal of this new and exciting alliance between two well established giants in the area of education,” said Enrico Ascher, M.D., co-chairman of VEITHsymposium. “Providing a balanced, progressive environment where all vascular care professionals can learn from each other is one other motivating factor that led to this arrangement. I’m certain that this new concept of working together for the benefit of our patients and for the advancement of science will succeed big time!”

“For decades, TCT has been the foremost conference for cardiovascular interventional therapy and the VEITHsymposium has been the leading meeting for non-cardiac vascular medicine and surgery,” said Kenneth Ouriel, M.D., MBA, co-chairman of VEITHsymposium. “The new alliance provides the opportunity to expand non-cardiac vascular educational offerings at TCT and interventional cardiology opportunities at the VEITHsymposium. The end result will be the most comprehensive cardiovascular conference in the world today.”