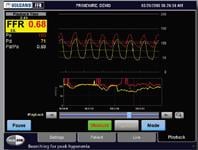 December 24, 2009 - The suggested use of fractional flow reserve (FFR) measurements in new guidelines is expected to greatly expand the technology’s usage, and one manufacturer said sales have already increased dramatically. The use of FFR was included among numerous revisions in joint treatment guidelines from the American Heart Association (AHA), the American College of Cardiology (ACC), and the Society for Cardiovascular Angiography and Interventions (SCAI).

FFR wire manufacturer Volcano Corp. commended the guidelines this week. The company said its FFR sales are up 73 percent year-to-date as compared with the same period a year ago. The company expects the elevation of the evidence supporting FFR to result in even more usage by physicians in 2010.

The guidelines suggest FFR can be useful to evaluate intermediate blockages in coronary arteries and help determine which lesions will benefit from stenting, and which should be treated with medical therapy alone. Based on the strength of the latest clinical data from the FAME study supporting the usage of FFR, the organizations elevated the level of evidence for FFR in their guidelines from Level B to Level A, the highest level possible. The study data suggested FFR can help limit the number of stents implanted to help reduce medical costs and improve patient outcomes.

Recent studies have shown that using FFR can provide better treatment guidance than just relying on angiography alone. FAME, a multicenter, randomized clinical trial originally published in the New England Journal of Medicine in 2009, demonstrated that multivessel procedures guided by FFR (instead of angiography alone) led to both better outcomes and reduced procedural costs. The study found that after two years, patients with multivessel coronary artery disease whose doctors used FFR guidance had a sustained 34 percent reduction in death and heart attacks. The data also showed that intermediate lesions by X-ray (judged to be 50-70 percent blocked) were in fact flow limiting only 39 percent of the time.

Dr. Hodgson said FFR is not an expensive technology and is fast and easy to use.

“Realizing the limitations of the angiogram is not a huge surprise, but a key question that many physicians want answered is ‘How often does the FFR get it wrong, and what are the consequences when that occurs?’” Dr. Hodgson said. “One of the most compelling data points for me is that of the 513 lesions in FAME participants that FFR defined as ‘nonischemic’ which were - as a result - not stented, only one of those lesions led to an MI after two years, or only 0.2 percent. That is remarkable.”

The FAME study also demonstrated that adhering to an FFR-guided regimen for multivessel disease is cost-beneficial to the hospital and payers by reducing material costs by $675 per patient, lowering average length of hospitalization by 0.3 days and reducing the total patient treatment cost at 12-months by more than $2,000.

Volcano and St. Jude Medical are the only two companies with FDA-cleared FFR catheters on the market.