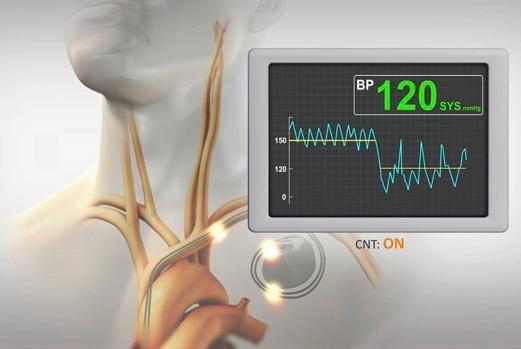 November 12, 2021 — Orchestra BioMed Inc. announced multiple presentations of long-term clinical results and ISH subgroup data from the MODERATO II study of BackBeat Cardiac Neuromodulation Therapy in patients with hypertension and an indication for a pacemaker at the 2021 Transcatheter Cardiovascular Therapeutics (TCT) conference.

In a subgroup of patients with ISH, a dangerous and challenging to treat form of hypertension prevalent in older patients, treatment with BackBeat CNT resulted in clinically meaningful and statistically significant reductions of 7.4 mmHg in aSBP and 11.9 mmHg in oSBP when compared to control (continued medical therapy) patients at six months. Further, in patients with ISH, BackBeat CNT drove statistically significant reductions of 9.4 mmHg in ambulatory Pulse Pressure and 13.3 mmHg in office Pulse Pressure at 6 months as compared to control patients.

“We are very encouraged by the exploratory findings highlighting BackBeat CNT’s impact in patients with ISH, particularly since a substantial reduction in Pulse Pressure can dramatically lower overall cardiovascular risk,” said Daniel Burkhoff, M.D., Ph.D., director of heart failure, hemodynamics and mechanical circulatory support research at Cardiovascular Research Foundation, who presented the study findings. “The results from the MODERATO II study offer compelling preliminary evidence that BackBeat CNT may provide a safe and effective therapy for ISH, which is the most common form of hypertension in older patients and one that is difficult to treat. The challenging nature of ISH often leads to the exclusion of these patients from hypertension therapy studies and contributes to their position as the majority of inadequately treated hypertension patients.”

MODERATO II was a European prospective, multi-center, double-blind study investigating the efficacy of BackBeat CNT in patients with persistent hypertension (aSBP ≥130 mmHg and office systolic blood pressure (oSBP) ≥140 mmHg) despite one or more anti-hypertensive medications. Following a 30-day run-in period, during which patients received only standard pacing along with anti-hypertensive medications, 47 patients who met follow-up screening criteria for daytime aSBP were randomized to BackBeat CNT (n=26) or control (n=21) groups.

Due to the advanced age and general poor health of the pacemaker population, the majority of the patients enrolled in the study had ISH, 23 patients in the treatment arm (88.5%) and 15 patients in the control arm (71.4%). ISH is defined as an oSBP >140 mmHg and diastolic BP <90 mmHg.

Although patients with ISH were not a prespecified subgroup, exploratory findings revealed statistically significant improvements in aSBP, oSBP and Pulse Pressure in ISH patients treated with BackBeat CNT as compared to control.

Additional key findings from study participants with ISH include:

“We are excited by BackBeat CNT’s significant and durable impact on blood pressure in the MODERATO II study,” said David Hochman, chairman and CEO of Orchestra BioMed. “The effects on ISH and Pulse Pressure are especially compelling given the prevalence of this particularly challenging form of hypertension in our initial target population of hypertensive patients indicated for a permanent pacemaker implant. We look forward to communicating next steps as we work to advance BackBeat CNT into definitive studies and towards regulatory approval.”

Based on data from the National Health and Nutrition Examination Survey (NHANES) III, 74.5% of U.S. adults over 60 years old have hypertension, with over 65% of them suffering from ISH. ISH patients have elevated systolic blood pressure (>140 mmHg), while their diastolic blood pressure remains normal or low (≤90 mmHg). ISH is a more difficult to treat form of hypertension because antihypertensive medications generally impact both systolic and diastolic pressure.

It is estimated that over 80% of treatment failure patients over 60 years old have ISH. ISH patients experience elevated Pulse Pressure (the difference between systolic and diastolic pressures), which is a known significant, independent risk factor for coronary heart disease.

Over 1.1 million pacemakers are implanted annually worldwide. More than 70% of patients indicated for a pacemaker suffer from hypertension.5 Given that pacemaker-indicated patients are typically older, it is estimated that the majority of hypertensive pacemaker patients suffer from ISH.