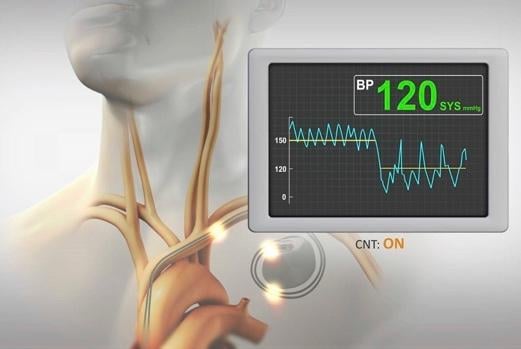 August 3, 2021 — Long-term follow-up data on hypertensive patients from the control group of the MODERATO II study who received crossover treatment with Orchestra BioMed BackBeat Cardiac Neuromodulation Therapy (CNT) demonstrated a clinically meaningful and statistically significant reduction in blood pressure. This was consistent with the decrease previously observed in the study’s treatment group during the same period.

The research was presented at the 2021 Heart Rhythm Society (HRS) meeting.

“I continue to be impressed and encouraged by the observed reduction in blood pressure in patients treated with BackBeat CNT. Reductions in ambulatory and office systolic blood pressure were clinically significant and persistent in control patients who went on to receive crossover therapy,” stated Professor Zbigniew F. Kalarus, M.D., Ph.D., chairman of the department of cardiology at Silesian Center for Heart Diseases (SCHD), Zabrze, Poland. “Of additional importance is that the rate of adverse cardiac events in these patients was lower during the crossover period as compared to the control period, when patients were not receiving treatment with BackBeat CNT.”

MODERATO II is a European, prospective, multi-center, double-blind, randomized study of BackBeat CNT (n=26) vs. control (n=21) in patients with persistent hypertension (ASBP ≥130 mmHg and oSBP ≥ 140 mmHg) despite one or more anti-hypertensive medications and a pacemaker indication. Of the 21 control patients (treated with antihypertensive medications only, BackBeat not activated), 14 were eligible for crossover to BackBeat CNT, and 13 completed 12 months of follow-up to-date (one patient died of cancer). Key interim study data:

A lower rate of adverse cardiac events was observed in the control patients during the crossover period as compared to the study control period when patients were not receiving BackBeat CNT.