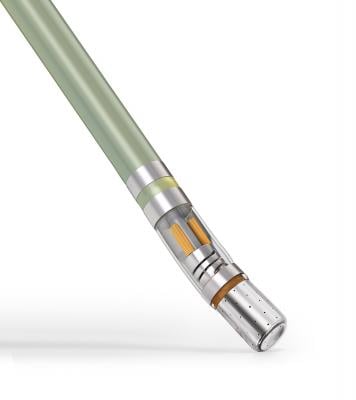 March 15, 2018 –  Johnson & Johnson Medical Devices Companies announced today that Biosense Webster, Inc., who works in the diagnosis and treatment of heart arrhythmias, has completed patient enrollment in its U.S. Investigational Device Exemption (IDE) study of the THERMOCOOL SMARTTOUCH SF Catheter. The prospective, multicenter, non-randomized study of 367 patients is evaluating the device for the treatment of persistent atrial fibrillation (AF), an irregular heartbeat that lasts beyond seven days.

The THERMOCOOL SMARTTOUCH SF Catheter, the most widely used ablation catheter on the market, was launched in 2016 in the United States to treat symptomatic, drug-refractory, paroxysmal AF, an intermittent AF that resolves within a week. The device combines contact force technology and a porous tip to optimize efficiency by providing uniform cooling at half the flow rate of earlier generation irrigated catheters, which eases the fluid management process.

“This is an important study that may lead to a new option for persistent AF patients in the United States who are unable to control their abnormal heart rhythm with drugs or tolerate the side effects these drugs can sometimes produce,” said Moussa Mansour, M.D., Director, Atrial Fibrillation Program, Massachusetts General Hospital (MGH) in Boston. “We’ve already seen very good results with the device in patients with paroxysmal AF and are now assessing whether it is beneficial to a wider patient population.”

AF is the most common heart rhythm disorder and a leading cause of stroke among people 65 years and older. An estimated 3 million people in the U.S. and 20 million worldwide are affected. Left untreated, AF can lead to stroke, chronic fatigue, congestive heart failure and additional heart rhythm problems.

“Catheter ablation is increasingly being offered to patients with atrial fibrillation based on the growing evidence supporting the procedure,” said Andrea Natale, M.D., Executive Medical Director, Texas Cardiac Arrhythmia Institute at St. David’s Medical Center. “This study will add to our knowledge and potentially lead to greater adoption of RF ablation as a viable treatment option for patients with persistent AF.”