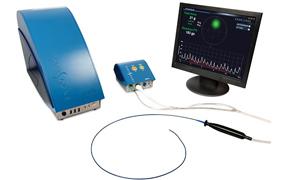 TOCCASTAR is a prospective, randomized, multicenter, investigational device exemption (IDE) clinical trial. Results of the study will be used to support a pre-market approval (PMA) application to the U.S. Food and Drug Administration (FDA) for clearance of the TactiCath catheter and accompanying TactiSys system.

It will be conducted at up to 30 centers in the United States and Europe. Three hundred patients will be randomized on a one-to-one basis for treatment with the company’s force-sensing TactiCath or a catheter approved by the FDA for paroxysmal AF. The study’s primary effectiveness endpoint will measure acute procedural success as well as chronic freedom from symptomatic AF, atrial tachycardia and atrial flutter at 12 months. The safety endpoint will report the incidence of device-related serious adverse events. In addition, it will assess the contribution of real-time contact force information to procedural effectiveness during ablation compared to conventional radiofrequency (RF) irrigated catheters.

AF patients are typically treated with pharmaceutical drugs that are frequently ineffective and may cause side effects, or they undergo invasive surgery. TOCCASTAR will explore a new catheter ablation treatment option for patients who have symptomatic paroxysmal (sudden and temporary) AF and who are resistant or intolerant to at least one class I-IV antiarrhythmic drug.

“The ability of physicians to control contact force during ablation procedures has long been a missing link in catheter ablation, and the consequence of this has been an historic tradeoff between procedure safety and effectiveness,” said Vivek Reddy, M.D., TOCCASTAR principal investigator and director of the cardiac arrhythmia service, The Mount Sinai Medical Center, New York. “TOCCASTAR is a landmark study in that its results may pave the way for contact force sensing to become the new standard of care in radiofrequency catheter ablation, a development that would finally address this issue and ultimately help improve safety, effectiveness and access to the procedure.”

During catheter ablation, the electrophysiologist uses a catheter to create a series of lesions along the heart wall to disrupt abnormal electrical activity. With no way to objectively measure the contact force between the catheter tip and beating heart wall, the electrophysiologist has to estimate – and frequently guess – the level of force required. This creates a delicate balancing act between procedure effectiveness and safety, as too little force may render the procedure ineffective and too great a force may perforate the heart wall.

TactiCath is the first and only commercialized force-sensing ablation catheter to give physicians a real-time, objective measure of contact force during the catheter ablation procedure. Launched outside of the United States in April 2010, the second-generation TactiCath is now used by electrophysiologists across Europe.