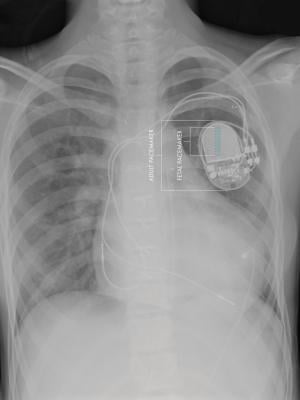 May 24, 2018 — Syncope with bifascicular block may be caused by intermittent complete heart block, but competing diagnoses may coexist. A new study tested whether a strategy of empiric permanent pacing (PM) reduces major adverse events more effectively than acting on the results of an implantable cardiac monitor (ICM). Results of the study were presented at Heart Rhythm 2018, the 39th annual scientific sessions of the Heart Rhythm Society (HRS), May 9-12 in Boston.

In a multinational, randomized, pragmatic trial, 56 subjects under 50 years old with bifascicular block, preserved left ventricular function, and less than or equal to one syncope in the preceding year, received PM and 59 received an ICM. The primary outcome measure was a composite of Major Adverse Study-Related Events (MASRE), comprised of death, syncope, symptomatic bradycardia, asymptomatic actionable bradycardia and device complications.

The PM and ICM groups were similar in age, sex, lifetime syncopes, syncope in prior year, duration of symptoms, no prodrome and baseline systolic BP. Forty patients had left bundle branch block and 75 had right bundle branch block and a left hemiblock. Patients were followed for a median 30 months, and 21 exited the study — eight patients died, six withdrew consent after 2 years, four withdrew due to cancer and three due to dementia.

PM effectively prevented the primary outcome with end study MASRE-free survivals in PM (63 percent) and ICM (22 percent) group (p<0.001). The proportions of patients with syncope were similar in PM and ICM groups (27 vs 31 percent, p=0.50, Wilcoxon). Fully 35 out of 59 ICM patients (59 percent) crossed over to PM. There were five pacemaker complications requiring reintervention.

The researchers concluded that permanent pacing compared to ICM is a preferred strategy in elderly patients with few but recent syncopal spells and bifascicular block. This is driven by the high proportion of mildly symptomatic bradycardias detected on ICMs leading to pacemaker insertion.