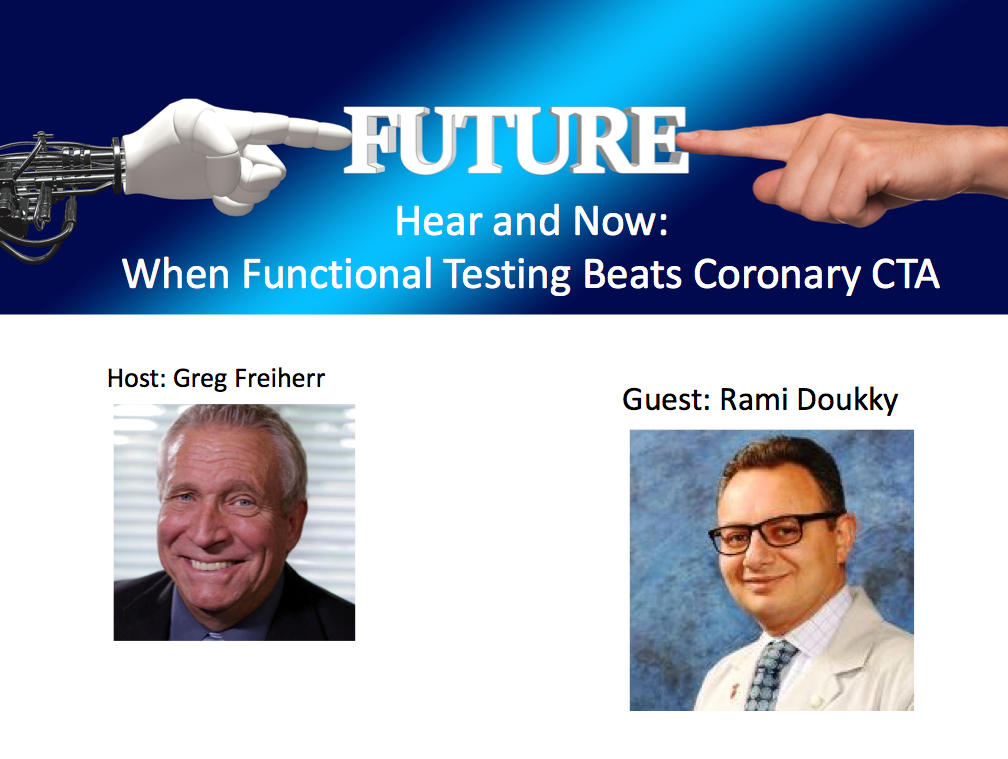 As a noninvasive technology, computed tomography (CT) is brimming with possibilities, particularly as an angiographic test for coronary artery disease (CAD).  But whether it should be used depends on the patient and surrounding circumstances, Rami Doukky, M.D., told podcast listeners of a on the Imaging Technology News website.

If the risk factors for CAD are low, coronary CT angiography (CTA) might rule out the presence of disease, thanks to the negative predictive value of the test, Doukky said on the podcast, which is hosted on the Imaging Technology News (ITN) and Diagnostic & Interventional Cardiology (DAIC) websites.  But when deciding whether to do the test, physicians should consider the relative capabilities of the institution to do CTA and functional testing.

“No matter how good the modality is, it is only as good as you can use it at your particular institution,” he said in the podcast. “So if, for example, your site has a very strong nuclear lab or echo lab and a weak CT lab …functional testing is the way to go for you.”

Headliner In A Great Cardiac Debate at ACC

In one of the “great cardiac debates” scheduled for Saturday, March 17 at #ACC19, this year’s annual meeting of the American College of Cardiology, Doukky will argue that coronary CT should not be routinely performed on every patient suspected of CAD. CT-based angiography should have a role, however, in the assessment of heart patients.

“I think cardiac CT is very well-suited for patients on the lower end of the spectrum with pretest likelihood of chronic disease,” he said in the podcast. “On the other hand, functional tests are better suited to patients who are in the intermediate to higher range of likelihood of disease.”

In a YouTube interview, Doukky, who not only leads cardiology at Cook County Hospital but is on the faculty of Rush University in Chicago, Illinois, said he “tends to offer patients what is right for them and not necessarily what is the most cool or what’s most expensive or what’s most modern.”

Functional tests have long been the mainstay for diagnosing CAD. “They have been the gatekeepers for coronary angiography,” Doukky said in the podcast.

One of the earliest such tests was exercise treadmill testing.  Others include stress echocardiography, which uses ultrasound to assess the heart wall for abnormalities, and myocardial perfusion with radioisotopes, initially with gamma cameras in planar imaging, then SPECT and most recently PET (positron emission tomography).

Coronary CT angiography became an option relatively recently. Doukky described this technique in the podcast as essentially an anatomic test that can determine stenosis and calcium build up in the coronary arteries.

Why Having Good Equipment Matters

Mitigating the choice of CTA, in addition to the patient’s likelihood of CAD, is the availability of a CT scanner capable of delivering the necessary performance.  The Illinois cardiologist said in the podcast that a 64-slice scanner is the bare minimum to perform coronary CTA. Although such tests might be formed with a scanner capable of as few as 16 slices per rotation, “a lot of patients cannot undergo these tests” because of the need for long breath holds, he said. Entry- and mid-level CT scanners typically are available in 16-, 64- and 128-slice versions.

Doukky gave two examples in the podcast – the first of a patient who would be well served by CTA; the second of someone who would not be.

“If you have a 40-year-old gentleman, let’s say, who has non-anginal type chest pain where the pretest likelihood of disease is at the lower end of the spectrum, coronary CTA could be a quick way to demonstrate that there is no evidence of obstructive disease,” he said in the podcast.   “On the other hand, if you have a 65-year-old gentleman or lady with typical anginal symptoms with a pretest likelihood of disease (being) fairly high, functional testing -- particularly with myocardial perfusion imaging  -- might be a better test.”

FFR-CT is Ready for Prime-time Evaluation of Coronary Disease

The Current State of Cardiac CT Technology in 2018